Faster than the blink of an eye, bigger than our entire galaxy and pulsating with unimaginable intensity, it is one of the most energetic cosmic events visible from earth observed and captured on record ― a shock wave that extends for 6,5 million light years.

Observing and capturing this magical “firework” in detailed images took expertise and planning. Prof James Chibueze, a researcher from the Centre for Space Research at the North-West University (NWU), made a significant contribution by processing data from the novel MeerKAT radio telescope, making it possible to capture the shock wave.

Prof James explains that shock waves form when clusters of galaxies collide. He says when two galaxy clusters attract each other through the force of gravity, it inevitably leads to a collision, resulting in a spectacular shock wave.

He contributed to the work of a team of international astronomers from the University of Hamburg in Germany, the National Institute for Astrophysics in Italy, the University of Helsinki in Finland, the Netherlands Institute for Space Research, the South African Radio Astronomy Observatory and the National Radio Astronomy Observatory in Charlottesville, USA among others.**

Their paper on the phenomenon was published in the prestigious science journal Astonomy & Astrophysics (A&A).

Prof James worked on the technical part of the research by adding value to the processed MeerKAT data as a member of the MeerKAT Galaxy Cluster Legacy Survey (MGCLS) technical working group.

In addition, he contributed to the scientific discussion of the possible interaction between a radio galaxy (a galaxy emitting radiation in the radio frequency range of the electromagnetic spectrum) and the southern radio relic (a diffused synchrotron* radio source found on the edge of galaxy clusters) of Abell 3667, a galaxy cluster.

He says the South African MeerKAT telescope offers researchers the sensitivity and resolution to study faint, large-scale structures (stretching over 60 times the size of our galaxy, the Milky Way) in the universe. The Abell 3667 galaxy cluster is one example of such fantastic results.

Often in the news for his part in discoveries

Prof James was also in the news last year and featured in Nature for his contribution to the discovery of strokes of hot gas (jets) bending when they interact with magnetic fields (read here: https://news.nwu.ac.za/new-discovery-lands-nwu-researcher-spot-top-science-publication).

He was the only researcher from Africa in 2020 who contributed to the Japanese radio astronomy project on the very long baseline interferometry (VLBI) Exploration of Radio Astrometry (VERA). This project found that the Earth is moving faster than was originally thought and is nearly 2 000 light years closer than previously believed to the black hole in the centre of the Milky Way.

*Synchrotron emission is radio frequency radiation generated when particles moving at speeds close to the speed of light are coupled in a magnetic field. 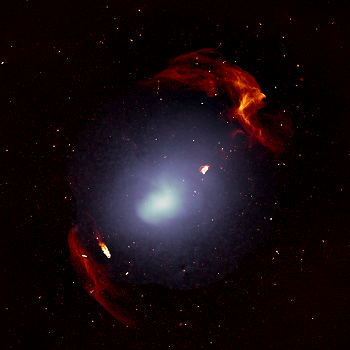 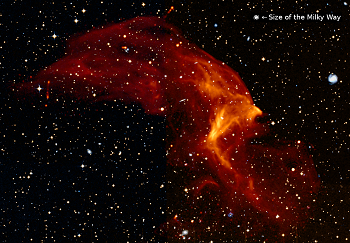 A zoom-in on the largest of the two shock waves, where the complex filamentary structure is evident. Most of the visible galaxies are not part of the cluster, being either in the background or in front of it. The size of the Milky Way – if it was at the same distance of the shock wave – is also shown. 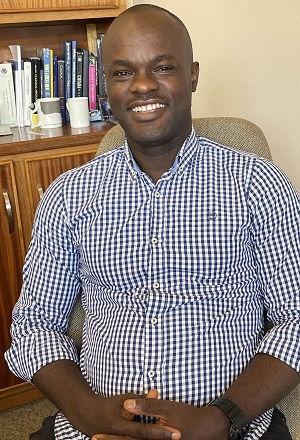