Millions of South Africans suffered under the impact of the national lockdown regulations introduced because of the coronavirus pandemic. A local Potchefstroom engineering company, CFAM Technologies, which is a spin-off company of the Faculty of Engineering of the North-West University, grabbed the bull by the horns to ensure that residents in and around the local area did not go hungry any longer.

Three of the company’s role players recently received recognition for their hard work from Rotary International’s local branch for a project they had launched to provide nutrient-enriched porridge to local residents.

CFAM is currently the only manufacturer of twin-screw extruders in Africa and specialises in a process in which raw materials like maize meal are cooked at high pressure and heat in an extruder to produce a cooked, dry product within a few seconds. Because of the rapid cooking process, the digestibility and absorption of nutrients by the human body and palatability of the product are enhanced.

According to LJ Grobler, director of CFAM Technologies and one of the awardees, the biggest benefit of extrusion is that vitamins and nutrients can be added to the dry final product after the cooking process. “Merely adding water or milk to this powdery, dry product makes this food ready to eat, offering a balanced meal,” Grobler says.

The CFAM Porridge Project represented one of the most innovative feeding schemes in South Africa and was nominated globally as one of six such innovations of which the media took note. More than 9 million meals have already been produced since March 2020 and Rotary International has a special link to this project.

When calls went out for funding to get the project off the ground, the Klerksdorp Rotary Club was one of the first to respond, as was Pastor Jaco Stander. “We know how difficult it was to get funding and sponsors in those early weeks of Covid-19, but Rotary did its part to distribute CFAM meals across South Africa. Rotary International, the Klerksdorp club and the Rotary e-Club also featured prominently in the CFAM documentary video that was made for an international audience,” Grobler says.

Mr Theo Venter, a renowned political analyst and employee of the North-West University Business School, presented the motivations for the prize winners.

The CFAM Porridge Project received recognition for the substantial contribution to humanitarian and educational programmes. The prize is titled the “Paul Harris Fellow”, named after Rotary’s founder, a Chicago lawyer, who started the organisation in 1905.

The Porridge Project started at the North-West University under the leadership of Prof LJ Grobler of the Faculty of Engineering. His international experience in extrusion made him a very important part of the success of the project. Prof Grobler and Mr Theo Venter wrote an opinion piece very early on in the pandemic to point out to key decision-makers the importance of food to the needy in times of lockdown during pandemics.

Under the leadership and engineering skills of Danie Vorster, the CEO of CFAM, world-class extruding machines are manufactured in South Africa. Mr Danie Vorster not only made the capacity of CFAM available for the Porridge Project, but also innovated during the project. Apart from working 24-hour shifts at the beginning of Covid-19, Vorster and Grobler created the “Porridge ATM”, for which they also received international recognition.

The third member of the team is Johan Janse van Rensburg, CEO of the ALS Construction group in Potchefstroom. While Prof LJ Grobler and Danie Vorster attended to the technology, food composition and production, Johan Janse van Rensburg attended to the logistics and liaison with the authorities. He represented the Potchefstroom Business Chamber in several high-level discussions when the government threatened the CFAM project early in the Covid-19 pandemic with several unjustified and irrational decisions about food distribution. His skills and negotiations created space to distribute food with the aid of churches, NGOs and especially Rotary Clubs. 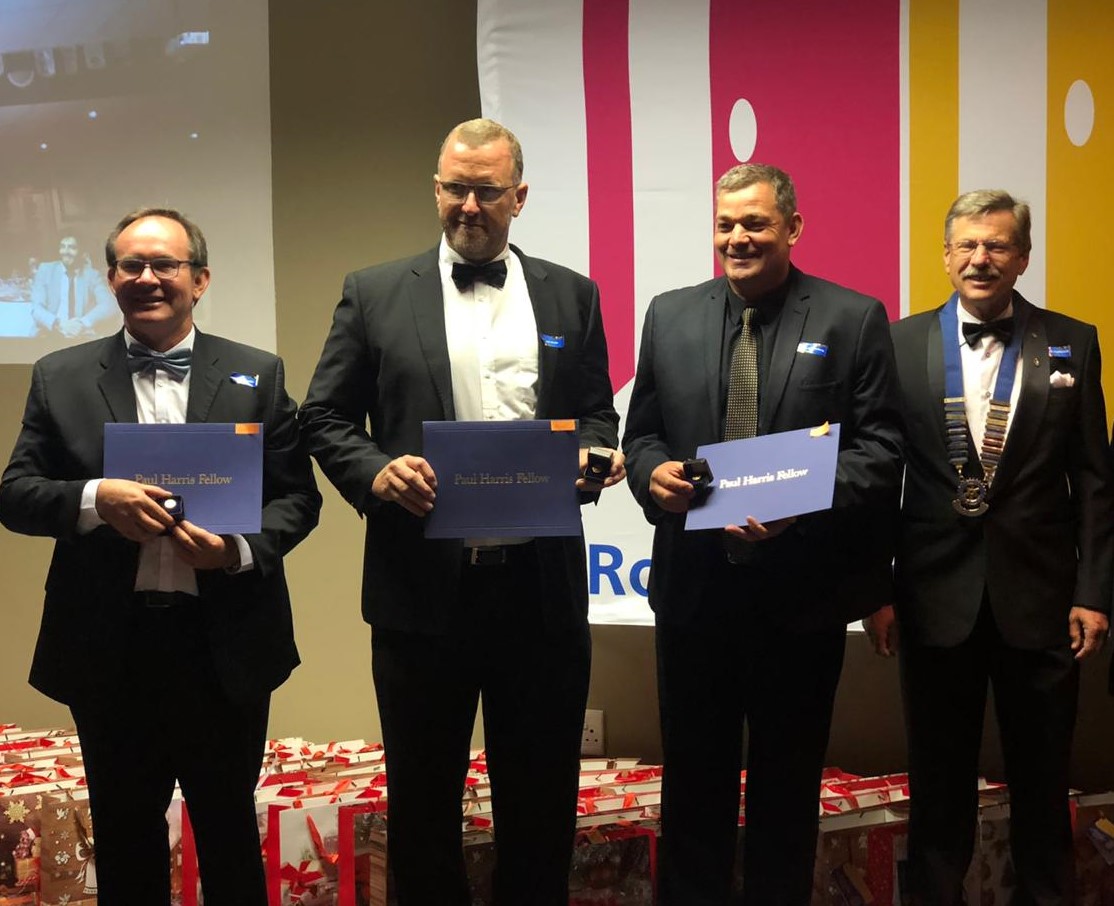