Chederick van Wyk was born in the year of champions, and that is what he has become. The world first met this future sprinter on 18 February 1995, a few months before the Springboks lifted the Web Ellis Trophy on a historic afternoon at Ellis Park. Destiny also had a plan for the young boy from Prieska.

Like so many other things, the Covid-19 pandemic severely derailed his preparations, and a stubborn ankle injury has contributed to the fact that he has not yet been able to reclaim his form of about two years ago.

He wants to set the example again.

When not practising or studying for his degree in Education at the NWU, Chederick likes nothing more than to spend time with his girlfriend of eight years, Jacqueen Adams, his family and friends. “My friends aren’t athletes, so it is sometimes nice to get away from the sport and just to relax.”

During the recent South African Championships his ankle injury flared up again and he had to withdraw during the competition. He has made peace with that, as he maintains that 2021 is all about getting back to where he knows he should be: in front on the track, the leader of the pack. 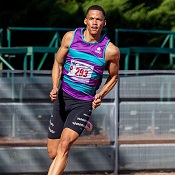