Power fluctuations sometimes associated with renewable energy resources could become a thing of the past through research under way at the North-West University (NWU) on new and better ways to store hydrogen.

The HySA Centre of Competence (Coc) at the NWU explains the storage problem as follows:

Electrical energy produced from renewable energy sources such as wind and solar is used to generate hydrogen through the process known as water electrolysis.

Hydrogen is then used as a fuel for proton exchange membrane (PEM) fuel cells to produce electricity and to mitigate the intermittency in renewable energy sources.

Despite this, there remains a need to store surplus energy in the form of hydrogen to eliminate power fluctuations.

HySA believes that resolving these fluctuations through better hydrogen storage methods could open up a host of possibilities for the application of renewable hydrogen, beyond stationary and mobile power applications. For example, renewable hydrogen can be used as a feedstock in many industrial processes, including for steel manufacturing, margarine production by hydrogenation of vegetable oils, floating glass production, chemicals and petrochemicals production.

These applications are currently limited, because hydrogen is difficult to store given its low volumetric density. Traditional hydrogen storage technologies are reported to be expensive, energy intensive and inefficient.

It is in this light that, HySA CoC, co-hosted by the NWU and the Council for Scientific and Industrial Research, and led by Prof Dmitri Bessarabov, has embarked on various research projects to seek alternative hydrogen storage methods.

One of these used Liquid Organic Hydrogen Carrier (LOHC) technology, where hydrogen is stored in the form of a heat transfer oil traded as Marlotherm-SH. This oil is a mixture of dibenzyltoluene isomers, which have been used in many industrial applications such as an insulating oil in electrical transformers, indirect heating of reactors, pharmaceuticals, etc.

This is a reversible process and the molecule allows numerous cycles of hydrogenation and dehydrogenation.

Dibenzyltoluene can be stored under normal conditions (ambient temperature and pressure) for long periods of time without self-discharge, and this allows seasonal energy storage, according to HySA. Furthermore, dibenzyltoluene-based LOHC is non-toxic, non-flammable and non-explosive. Unlike diesel or gasoline, it is also not consumable and only hydrogen is released or stored.

This LOHC molecule is not classified as dangerous goods and can be transported using existing infrastructure for fuel, such as tanks, trucks and ships.

HySA believes that South Africa has the natural resources to make it an international “powerhouse” for renewable energies in the future energy market. LOHC technology could play an important part in the storage, transport and trade of these renewable energies.

Currently the LOHC technology has been deployed in hydrogen refuelling stations for mobility and hydrogen logistics. The new developments are expanding in the rail and maritime industries.

So far, LOHC technology in South Africa has only been piloted at HySA Infrastructure CoC. A pre-commercial scale hydrogenation system for the hydrogen storage has recently been commissioned jointly with Framatome, and is currently in operation. This system is fully automated and has the capacity to store 4 Nm3/hr of hydrogen.

These are exciting developments in the promising field of renewable energies, with results eagerly awaited as the hydrogenation project proceeds. 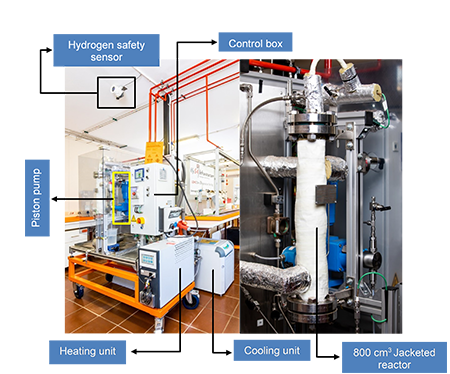 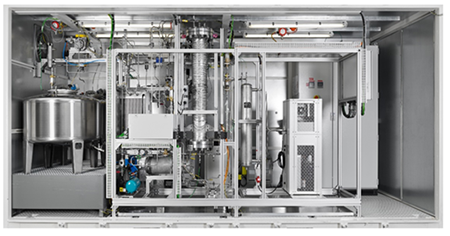 A pre-commercial hydrogenation plant procured in collaboration with Framatome GmbH.