Sounding out the stars

Space is not as silent as it may seem, and asteroseismologists know this. Asteroseismology is a booming field full of opportunity for students and young researchers and has an impact on many other fields of astronomical research.

But what is asteroseismology all about? Prof Don Kurtz, an A1-rated professor now based at the North-West University’s (NWU’s) Mahikeng Campus, explains.

“The Earth’s atmosphere reverberates with sounds, wind, thunderstorms, waves crashing on the seashore, human activity and nature. Sounds are pressure waves – in our atmosphere they move through gas and cannot get out into the near-emptiness of space.”

Stars are entirely gaseous and they too pulsate with trapped sound waves. Sound waves in the Sun are produced by the rising and falling of hot gas columns that set the Sun to ringing like a giant musical instrument. The Sun pulsates up and down and gets brighter and dimmer. By measuring the frequencies of the sounds and comparing them to models of the interior of the Sun, helioseismologists can see into the Sun from the surface right down to the nuclear inferno in the core.

Asteroseismologists do the same for the stars, where they obtain the global frequencies of stars from the brightness variations measured by space telescopes, such as the current Transiting Exoplanet Survey Satellite (TESS) mission.

“We determine the ages, masses and radii of stars with asteroseismology, then use this information to characterise the more than 4 000 exoplanets discovered around other stars,” adds Prof Kurtz.

“The search is on for Earth-like planets with liquid water and, possibly, life. We use the ages determined for red giant stars to map out the chemical evolution of our home galaxy, the Milky Way, a field called galactic archaeology.”

Stars that dwarf our Sun

Prof Kurtz works on stars much more massive than our Sun, including studying the pulsations in the most peculiar stars that he discovered at the South African Astronomical Observatory (SAAO). He also works on dying stars that are only the size of Earth.

“We can now see the interior rotation of stars right down to their cores. We can measure how their interior angular momentum changes and transports energy as they evolve from young stars to old red giant stars, to dying white dwarfs. Our new asteroseismic observations are improving our understanding of the interior structure of stars and of their evolution and lifetimes, with checks on the cosmological lifetime of the entire universe.”

Here at the NWU, Prof Kurtz works with astronomers spread across all continents except Antarctica. Recently they discovered a new type of pulsation in binary stars that orbit each other in less than two days. These stars are so close that they are strongly distorted by tides. For some of the stars, the tides make them single-sided pulsators, where only one side of the star is pulsating – a new discovery illustrated below: 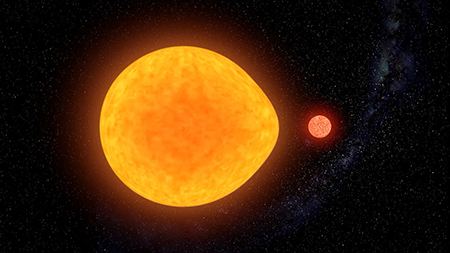 Some of these binary stars will eventually merge to produce rare, exotic types of stars. Others will transfer mass between them and become supernovae that help map the distances to galaxies and expansion of the universe. Some have already stripped away the outer layers of one star when it was a red giant, giving us a direct view of the remnant of the core of the star.

Big data and the stars

“The TESS mission continues to measure the pulsations of stars by their hundreds of thousands. New ground-based surveys, such as the 8-metre telescope that is being developed at the Vera Rubin Observatory (VRO) in Chile, will inundate us with vast amounts of data – about five terabytes (Tb) per night (a Tb is 1 000 Gigabytes). Asteroseismology is in the era of big data and machine learning, with spin-offs from the computational techniques developed to do astronomy.”

As they listen to the stars, the professor and other researchers at the NWU clearly have plenty to offer the world when it comes to asteroseismology. 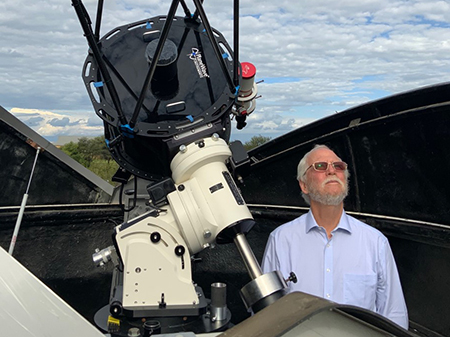