The North-West University (NWU) saluted Dr Geraldine Fraser-Moleketi with an honorary doctorate on 19 November 2021 for her exceptional contributions to the South African political landscape and society.

Dr Fraser-Moleketi served as the Minister of Public Service and Administration from 1999 to 2008. She was also a member of the national executive committee of the African National Congress (ANC) until 2007.

A strong advocate for social and economic transformation in South Africa and Africa, Dr Fraser-Moleketi served as an alternate delegate to Joe Slovo on the management committee of the Convention for a Democratic South Africa (CODESA), the multiparty negotiating forum that, through its declaration of intent, gave birth to South Africa’s constitutional democracy.

She served as a Member of Parliament, a member of the Constitutional Assembly, and in the Cabinet of successive governments for nearly 14 years, influencing the development and implementation of transformative policies on social welfare and population development, as well as public service and administration.

In her drive to make continual public contributions on issues such as youth and the empowerment of women, along with capacity development in education, governance and poverty eradication, she was involved with various initiatives and structures of the African Development Bank and bodies of the United Nations. These include the United Nations Development Programme (UNDP) and the Committee of Experts on Public Administration (CEPA).

Dr Fraser-Moleketi is a former director of Global Democratic Governance Practice of the UNDP and served as a member of the Quadrennial Comprehensive Policy Review of the United Nations Development System.

During her political career, she served as the national deputy elections coordinator of the ANC in preparation for the 1994 elections. She previously served in the leadership of the South African Communist Party (SACP) as a member of the central committee and politburo, including as the deputy chair of the SACP. She played different leadership roles in community and student politics in her youth. Furthermore, Dr Fraser-Moleketi was a member of both the ANC and Umkhonto we Sizwe while the organisation was banned.

Before being appointed Minister of Public Service and Administration, she was first Deputy Minister, then Minister for Welfare and Population Development. As such, she was responsible for the expansion of the social safety net and specifically the inception of the child-support grant. She led an inter-ministerial committee for children and young people/youth at risk, and developed leading programmes in the war against poverty.

As Minister of Public Service and Administration, her flagship initiative was the Government Employee Medical Aid Scheme (GEMS), which was registered in 2005 to meet the healthcare needs of government employees. Her other initiatives include instituting senior management service for the development of senior management cadres, initiating the occupation-specific dispensation (OSD), which sought to recognise and reward professionals in the public service, including educators and health workers, and conceptualising the Community Development Workers programme as a way of bridging the gap between the government and disadvantaged communities.

She also made an exceptional public contribution to the improvement of society beyond the country’s borders. Dr Fraser-Moleketi was a former Special Envoy on Gender of the African Development Bank (AfDB), at the level of vice-president, and was involved with the finalisation of the gender strategy in the AfDB in an endeavour to improve the quality of Africa’s inclusive growth agenda.

She introduced various flagship initiatives, including the conceptualisation and launching of the Affirmative Finance Action for Women in Africa Fund in May 2016. When it was closed down a few years later, it stood at US$ 300 m. 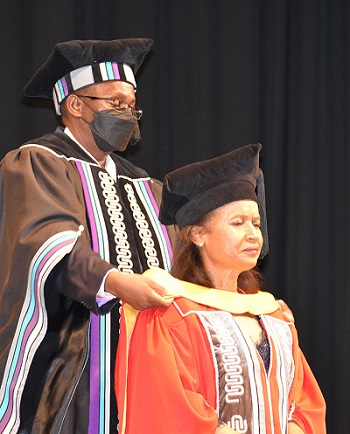