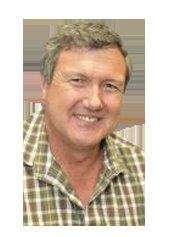 Kobus van der Walt joined the Potchefstroom University for Christian Higher Education as lecturer in the Department of Geography and Environmental Studies in 1990.  In 1993 he obtained a Ph.D. degree on the dispersion of asbestos fibres from disused tailings dumps into the environment, and was promoted to senior lecturer in Geography and Environmental studies in 1994.  Subsequently, he completed further training in Environmental Law, Environmental Audit, Groundwater management, Hydrological Simulation, State of the Environment Reporting on the Internet and Project Management.   He served as Chairman of Geography & Environmental Studies for several years, and has been the boarding house master of Excelsior men's hostel of the Potchefstroom Campus of the North West University from 1997 to 2005.  In 2003 he was promoted to Associate Professor and in 2010 to Professor in the Philosophy of Natural Sciences and Technology.

Kobus specialises in environmental management, hydrology, integrated catchment management and geomorphology and is registered with the South African Council for Natural Scientific Professions as a Professional Natural Scientist (Environmental Science), as well as with NQA as Environmental Auditor. He has supervised 51 masters and 10 PhD students in his career thus far.

He has been author and co-author of more than 150 publications and reports, and acted as Guest Editor for several prestigious international scientific journals.  He has made numerous presentations at academic conferences and is regularly invited as guest speaker at conventions and meetings. He also presents the weekly "Omgewingspraatjie" (Environmental talk) on the national Afrikaans radio station (RSG).

Kobus is married to Ina and they have three children, Lize, Sonja and Boeta.