NWU principal and vice-chancellor, Dr Bismark Tyobeka, said the ambassador’s visit was important as the university was considering partnering with the Colorado School of Mines to assist in establishing an NWU School of Mining.

“Our plan is to take mining to the next level, in particular by ensuring that we reach zero deaths and accidents in our mines. We are quite confident that partnering with the Colorado School of Mines, among others, will take us to that level. We can only achieve this level of (mining) safety by employing and deploying advanced technologies,” said Dr Tyobeka.

Ambassador Brigety II, himself a distinguished academic and decorated US military officer, delivered his speech focusing on how academia can promote human rights and democracy.

He told delegates, among them NWU politics and international relations students and members of the university management committee, that education is dear to his heart and he believes in its transformative power.

The ambassador highlighted the high number of displaced people worldwide due to wars, rising inflation that is challenging people’s livelihoods, the effects of the Covid-19 pandemic, and climate change as some of the main issues affecting people around the globe.

“Domestically, South Africa is undergoing profound changes. Your country is now facing the full challenges of poverty, inequality and unemployment and the political consequences that go with addressing those challenges,” said Ambassador Brigety II.

He said the international system is under stress and strain like it has not seen since the end of World War II.

“World conflicts from Syria and Ethiopia to Myanmar and Yemen have led to the highest number of displaced people ever recorded in human history.”

The Ambassador also expressed concern about what he calls “Russia’s brazen invasion of Ukraine”.

He fielded various questions from NWU students about US policy issues and his views on strengthening state institutions and democracy, as well as the United States’ student exchange programmes.

Ambassador Brigety II concluded his visit to the campus with an interview at the campus radio station to address several questions submitted by students.

He was also scheduled to engage high-ranking North-West Provincial Administration officials, some of whom attended his talk. 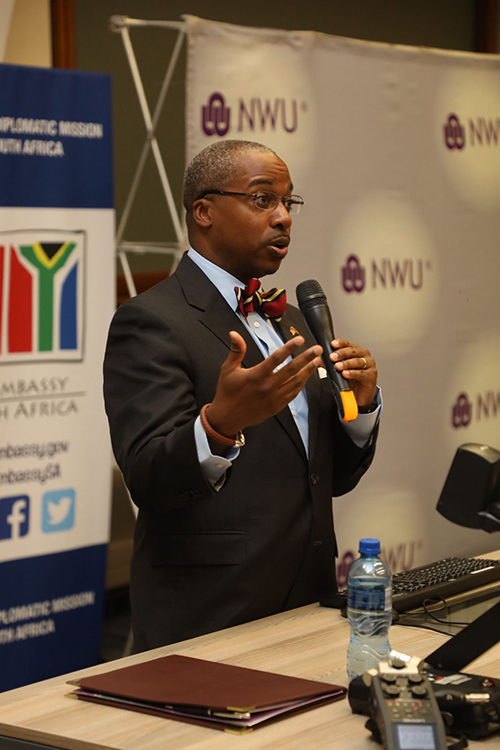