Tokyo and 60 m are Jo-Ané’s targets

Jo-Ané van Dyk has just completed and hour-long physio session, but – like always – her personality is bubbling like champagne. “No,” says the 23-year-old javelin champion of the North-West University (NWU), there are no injuries: “Just maintenance work!”

She could have rested on her laurels if she wanted to, safe in the knowledge that she is one of the best javelin throwers on the continent. After all, her list of achievements reads like a Christmas list for hopeful javelin throwers, and her talent – and her throwing shoulder – has been displayed across the world.

In 2016 she won silver at the African Championships and at the under 20 World Championships (Poland), and in 2018 (Nigeria) and 2019 (Morocco) she once more stood on the second-highest step of the podium for her continent.

And now? “Everyone is focusing on the Olympic Games in Tokyo this year. The European athletics season starts in May, then there are the African Championships in Algeria, the SA Championships in April, and before that the World Student Games.”

In addition to these mountains, there is her Everest: 60 m. This farm girl from Heidelberg in the Cape has not yet exceeded this distance.  If she can manage it this year, Tokyo is a given. However, her career in this sports code is still in its infancy, with her peak as javelin thrower still far in the future.

“People do not understand that we reach our peak only considerably later. I do want to focus on athletics over the next four years, because there will be many opportunities like the Commonwealth Games and the World Championships to show what I am capable of. If I cannot throw further than 60 m after that, I will have to reconsider my career.”

She laughs: “Then I should perhaps retire and start doing triathlons. I am mad about jogging, but as a javelin thrower I cannot do that now. However, I will never stop exercising.” 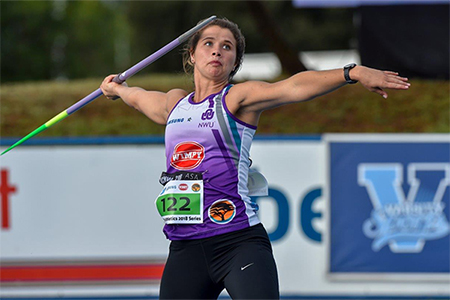