She really is the stuff legends are made of.

Prof Petra Engelbrecht, extraordinary professor at the Faculty of Education at the North-West University (NWU), is one of 62 researchers profiled in Legends of South African Science II, a publication by the Academy of Science of South Africa (ASSAf).

According to ASSAf, she has used her formal academic training in her specific field and demonstrated how engagement with scholars in other fields, both locally and internationally, contributed to her becoming a champion and a leader in advancing knowledge.

In 2007, Prof Engelbrecht was appointed as the first female dean of the Faculty of Education Sciences at the NWU’s Potchefstroom Campus, and after 2010 she focused solely on research – first at Canterbury Christ Church University and then again at the NWU after 2015.

Her work locally made waves abroad and created opportunities for collaboration with several countries, including Finland, which is widely regarded as a country with an almost “perfect” schooling model.

She spent time in the Palestinian West Bank and Gaza between 2011 and 2015. “You cannot enter and exit Gaza the same person,” she explains, noting that the experience challenged her own views of human rights because of the complex geopolitical situation.

There she led two development programmes for pre- and in-service teachers which were funded by the World Bank and the Palestinian government.

“It was a critical journey of self-reflection for me because I was so aware of the cultural competencies needed for sustainable collaboration,” she says. “The Gaza and West Bank experience reminded me of the impact of my own work.”

She recalls a reviewer of her published work once stating that her conclusions were often that “attitudes need to change” or “teachers need to be trained” – an unfortunately pervasive trend in academia in general.

Her research on inclusive education and the training of teachers focuses strongly on sustainable solutions, and some of the recommendations in research reports she co-authored were taken up in policy documents in Palestine and Malawi.

In 2018, the National Research Foundation rated her as an internationally acclaimed researcher, something she had never envisioned for herself when she completed her first degree back in 1969.

The University of Eastern Finland awarded Prof Engelbrecht an honorary doctorate in education in 2014. She also received the Stellenbosch University Vice-Chancellor’s Award for outstanding research in faculties, awarded for the first time in 1999, and is an elected member of the South African Academy for Science and Arts (1991). 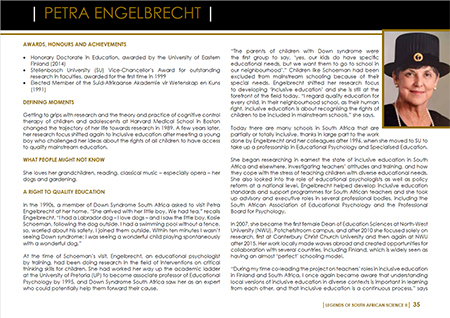