Phoenix rises at the NWU

From the ashes of Naledi a Phoenix rises. The North-West University’s (NWU’s) new solar car from the Faculty of Engineering, Phoenix, is fluffing its feathers to spread its wings during the Sasol Solar Challenge that starts on 22 September in Pretoria and ends in Stellenbosch. 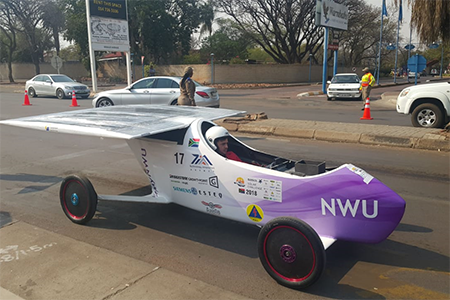 In 2016 the NWU was the star of the Solar Challenge show and two years later, after the previous version of the car, Naledi, competed in the 2017 Bridgestone World Solar Challenge in Australia, Phoenix is ready to take up the mantle.

Testing first took place in Bela-Bela, and thereafter teams moved to the nation’s capital. The first part of the testing involved static scrutineering. Drivers were put through medical tests and the mechanical, electrical as well as battery components of the car were tested. The team passed static scrutineering and thereafter the car was put through its paces during dynamic testing. They passed this phase of testing as well.

Now the fun in the sun begins. Phoenix boasts a unique, light design with a centre of gravity that is closer to the front of the car. With a new suspension, steering unit, ground-breaking software designed to measure telemetry and a team brimming with enthusiasm, Phoenix will be looking to better the NWU’s 2016 accomplishments. These included the longest daily distance by a South African team and awards for professionalism, safety and merit.

The NWU will keep you up to date with Phoenix’s progress during the duration of the race.

Watch a video of the solar car: