Over the past few years the North-West University’s (NWU) Vanderbijlpark Campus female basketball team has made ground-breaking strides within the sporting fraternity.

Not only did the team walk away with Team of the Year award at the recent Sedibeng Women in Sports Awards, but Enid Matika, NWU Basketball sports manager, also received the Sports Administrator of the Year award.

The Sedibeng Women in Sports Awards event is the brainchild of Futballing Girls founder Moonira Ramathula, who after winning an award in 2017, decided to recognise, celebrate and empower women in sport at district level.

“Receiving the Team of the Year award affirms that all the hard work and sacrifices made by the team and the players were not in vain. I would like to thank all the players for their dedication - it can only get better from here,” says Enid.

On receiving the Sports Administrator of the Year award, Enid says that this is only the beginning, and that she feels it is time for women to be recognised and celebrated, especially since they have to go the extra mile to prove themselves.

“It is an honour to receive this award on behalf of all women involved in sports.”

Not only is Enid a sport fanatic, but she is also the Sedibeng Netball secretary, Heap Ringball secretary and the Silver Ferns Netball Club vice-chairperson. She also manages her late father’s soccer team, Matika FC, back in Limpopo.

The NWU Vanderbijlpark Campus female basketball team has done very well at local and national level. After achieving silver twice at the University Sports South Africa championships in 2018 and 2019, the team is rated second best in the country. They also came second in the Varsity Cup.

This inspiring team aims to build students through sports, and hosts two annual tournaments for senior and under-19 players. During these events the team recruits and offers bursaries to prospective students. 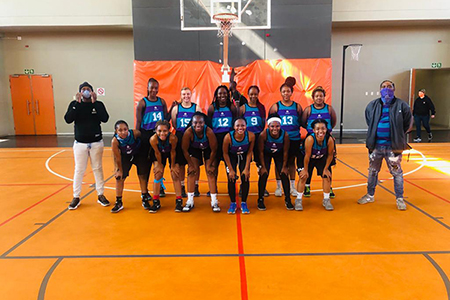 The NWU Vanderbijlpark Campus female basketball team received the Team of the Year award at the Sedibeng Women in Sports Awards.