NWU on the edge of enhanced understanding of the human brain

Despite some remarkable advances in the history of mankind, the functionality of the human brain remains a mystery. Wouldn’t the possibility to look into the human brain with high precision in a much easier way just be amazing? This has just been made possible at the North-West University’s (NWU’s) Centre for Health and Human Performance (CHHP).

The CHHP is now the proud owner of one of the world’s most technologically advanced devices which measures brain functionality in real time.

The near-infrared spectroscopy neuroimaging device (NIRSIT) is a portable, wireless device that can be placed on a subject’s head in order to track brain function. This Korean-designed device utilises light sensors to detect changes in the blood flow of the brain. Most of the blood flows to the area of the brain that is predominantly used during a specific situation.

Whether it be activities like emotion, problem-solving, heartache, joy, excitement, or object observation, each activity will cause the blood to flow to different parts of the prefrontal area of the brain. When this happens, the device can visualise the specific brain activity in real time.

According to Dr Gregory Lamb, a senior lecturer and paediatric neurologist at the NWU, the NIRSIT device will allow for various research opportunities, but as a priority, they will utilise this device to detect concussion in athletes in order to eliminate the further risk of cognitive impairment.

“Various tests and tools are currently used to assess cognitive changes after a concussion. Our NIRSIT device can now offer a clearer diagnosis, in real time, about the brain condition of those who have suffered concussion and are likely to have an adverse effect, such as cognitive impairment,” he says.

Dr Lamb adds that in a multidisciplinary approach, other fields of study would also benefit from this device. “In the CHHP, leading scientific expertise is applied to all our diverse services. Understanding human performance and health in a variety of contexts is at the heart of everything we do.”

Dr Lamb says the device can also be used with regard to research of conditions such as dementia, Alzheimer’s disease and ADHD (in children), and that they suspect that the device will offer a more accurate diagnosis of these conditions than ever before.

“This device could help to contribute to a better understanding of how the brain works – in terms of functional circuits and the changes in the brain in response to changes in the environment. The device is set to change the landscape of neuroscience research and the medical sector by offering unique images of the brain’s functionality.”

“According to scientists, we know only a fraction of the functioning of the human brain. We are proud to be a part of research that will allow us to better understand the complexity of the human brain,” he says. 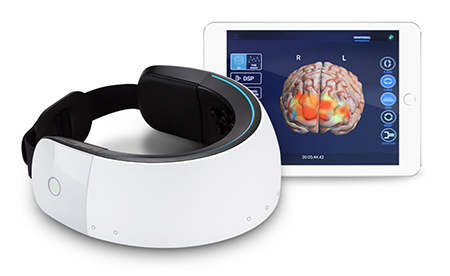