The global population is rapidly increasing and is expected to grow to 9,2 billion by 2050, according to the United Nations (UN). A UN Food and Agriculture Organisation report raises serious concerns about future global capacity to produce sufﬁcient agricultural products to sustain livelihoods and satisfy the ever-growing human population.

North-West University (NWU) master’s graduate Bongiwe Dhlamini has been unearthing vital knowledge about what can be done to increase agricultural productivity while maintaining good soil quality and land.

In her master's study, titled “Sulphate-supplemented NPK nano-fertilizer and its effect on maize growth”, Bongiwe examined the soil on the NWU's Mahikeng Campus in for its suitability for growing maize (Zea mays L.), and found that it lacks sulphur.

Bongiwe says she looked at maize because it is one of the essential cereal crops for food security worldwide, but depends on sufficient sulphur for good growth.

She says agricultural inputs such as inorganic nitrogen, phosphorus and potassium (NPK) fertilizers have been reported to increase crop productivity by approximately 60%. However, the major concern with the use of inorganic fertilisers is that they have been reported to promote environmental problems such as soil salinity and degradation and water pollution.

Sulphur deﬁciency in soil has been repeatedly articulated in the agricultural sector as it limits protein biosynthesis and chlorophyll content, thereby limiting crop production.

Bongiwe’s study, supervised by Prof Lebo Seru from the subject group Chemistry, has shown that the use of sulphate-supplemented NPK fertilizer (NPKS) nano-fertilizer treatment increased the plant height, number of leaves, and chlorophyll content of maize.

The results also showed that incorporating sulphur into the NPK and nano-formulated NPKS seems to have the potential characteristics for effective, productive maize and sustainable agricultural activities.

"Nano-fertilizers represent a paradigm shift in agriculture, especially for maize production. They have increased surface area and higher reactivity, which is one characteristic that makes nano-fertilizers potentially affordable for the farmer since they can be applied at lower rates than normal fertilizers,” she says.

“It is important to have different nano-fertilizer compositions for each soil type to increase crop production and reduce the usage of chemical fertilizers.” 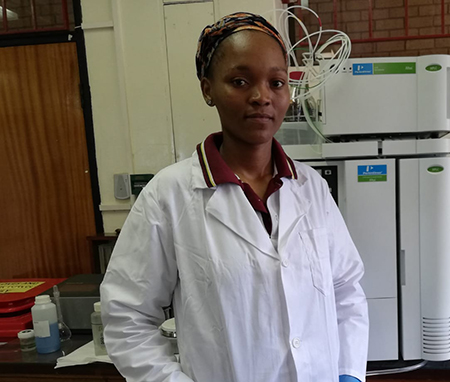