Greig’s career is in the fast lane at Tesla

Greig works for electric vehicle and clean energy company Tesla in Amsterdam in the Netherlands, where he is an application engineer for residential energy products in Europe, the Middle East and Africa.

Greig completed his BEng (2016) and MEng (2018) in electrical engineering at the NWU’s Potchefstroom Campus.

“I was always interested in how things worked, and as a child I often took devices apart. So, engineering seemed like the natural choice,” he says.

While studying, he worked on the Faculty of Engineering’s famous solar car project, obtaining hands-on experience of the potential of solar energy. He gained insight into the vehicle’s highly efficient solar system, combined with vehicle drive train and telemetry. Working on the car also helped him to see first-hand how he could apply his engineering knowledge to real-world problems. It also propelled him into a career in renewable energy.

Before joining Tesla in Amsterdam, Greig worked at the SOLA Group, a company that does solar installation in South Africa. Projects he worked on included designing large off-grid batteries, as well as solar and diesel systems for private islands in Seychelles and Mozambique.

Two important lessons that Greig learnt while at the NWU – and which he still applies today – are to be both an active listener and an active learner. In his view, it is better to take the time to understand a concept or principle rather than simply memorising things.

“Each person is an expert in something, so every conversation is an opportunity to learn something if you're really willing to listen,” he says.

Greig says having been exposed to a wide range of international professionals, he can honestly say that the NWU equips its engineering students to comfortably compete on an international level. 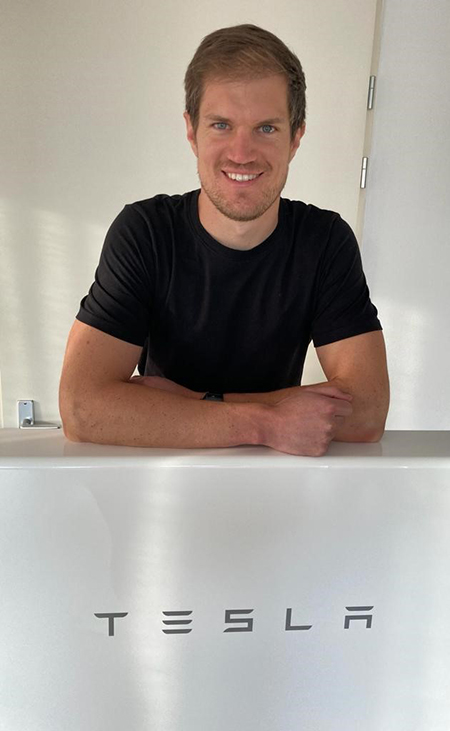 NWU alumnus Greig Swanepoel works for Tesla in Amsterdam, where he is an application engineer for residential energy products in Europe, the Middle East and Africa.