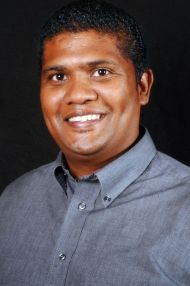 Mark is a professor in Zoology at the NWU and studied at Stellenbosch University (1992–2000) completing his PhD degree in 2000. His research focus is earthworm ecotoxicology (organismal and cellular effects) and the broader field of soil ecotoxicology (agricultural and mining areas). This research is done in order to determine soil pollution with the aim of making recommendation on how to address and manage these effects. In addition to this he also does research on organic waste management utilizing earthworms. Current research projects undertaken by him include assessing the effects of mining activities on the surrounding soil environment by using earthworms (Eisenia andrei) and potworms (Enchytraeus) as indicator species. At present his research grouping is the leading soil ecotoxicology group in South Africa and Africa. He was voted as Steering committee member (representing Academia from Africa) of the Global Soil Advisory Group by SETAC (Society of Environmental Toxicology and Chemistry). The latter is an international “not-for-profit, global professional organization comprised of some 5,500 individual members and institutions from academia, business and government.” He’s also been appointed as regional convener for EIGSA (Earthworm Interest Group SA). He also was appointed as extraordinary professor at the University of Gävle (Sweden) 2009–2014 as part of the Linnaeus-Palme Programme. During 2015 he was invited as distinguished professor at the University of Central Lancashire (Preston, UK) under their distinguished visitor program.

Google Scholar
Contact Me
Telephone Number
018 299 2501
E-mail
mark.maboeta@nwu.ac.za
Other Experts
Other experts from
Faculty of Natural and Agricultural Sciences
Other experts in
Zoology
Media, links, addresses and key documents
Other Media