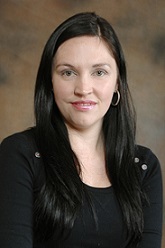 Carina Mels is an associate professor and manager of the Research Laboratory in the Hypertension in Africa Research Team (HART). She obtained her PhD in Biochemistry in 2011 and holds an Y2 rating from the National Research Foundation. She authored several articles (>40) in international peer reviewed journals on various aspects associated with hypertension (since 2012), with a special focus on the involvement of oxidative stress in the development of cardiovascular disease. On 25% of these papers she was either the first or last (senior) author. Recently she began to expand her key research areas to include novel technologies, specifically proteomics and metabolomics, and their relation to measures of cardiovascular function. She acquired research funding from both the National Research Foundation Thuthuka programme and from the Medical Research Council Self-Initiated Research programme. Other recognition and awards she received included a Young Investigator Travel Award from the American Society of Hypertension (2013). She was selected by the New Investigators Network of the International Society of Hypertension as the Spotlight Feature of the Month (August 2014). She received the silver oral award at the 2nd biennial congress of the South African Hypertension Society and the South African Stroke Society (2016). She was also elected to serve on the board of the South African Hypertension Society. She also frequently acts as reviewer for journals such as BMC Cardiovascular Disorders, Hypertension Research, Ethnicity and Disease, Cardiovascular Diabetology, Food Research International and PloS One.