A great deal of courage and grit are needed to open an innings and look a determined opening fast bowler unwaveringly in the eye. However, 22-year-old Ruan Havenga, attacking opening batsman of the cricket team of the North-West University (NWU) in Vanderbijlpark, remains unfazed and dreams of establishing himself as a professional cricketer.

Ruan caught the eye of Albert and Malan Morkel, who had established and were managing the former NWU Vaal Cricket Academy, at an early age.

“I identified him when he was still in primary school, and knew that his talent would take him a long way. We arranged a bursary at Garsfontein High School for him and everything then went according to plan. He made the Titans group and went to play overseas,” says Albert Morkel, father of the former Protea players Albie and Morné.

However, his success on the cricket pitch did not just fall into his lap. “I worked very hard to get where I am. I even practised cricket in my hostel room!” Ruan remembers.

His cricket skills are not limited to swinging a bat. He is also a good leg-break bowler, and boasts a personal best of 6/21. He hit his personal best score of 221 runs in the Pretoria Premier League.

The highlight of his cricket career was when he was selected for the SA Rural team in 2017.

Ruan is the current captain of the NWU Vanderbijlpark USSA cricket team and enjoys ploughing his knowledge and skills back into the game. At the Northern Academy he practised along with great names like Rassie van der Dussen, Junior Dala and Henry Davids.

His approach to the game is uncomplicated. “You have to realise this is a team sport. As soon as you start playing on your own, things go badly. Cricket is about much more than just a physical game.”

Although his dreams are big, he knows there is still a lot of work ahead. “I would like to take my cricket to the next level and become involved in the Gauteng Academy team at first, and later in the Strikers team. My biggest dream is to make my television debut,” he confesses.

He also loves coaching, and in between his studies he offers part-time batting and cricket lessons. “I would like to complete my Level 2 coaching course and later start an academy or something like that,” he explains. 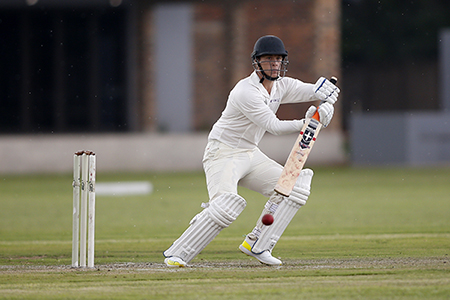 Ruan Havenga, opening batsman for the NWU Vaal cricket team, is at his happiest when the leather ball hits the middle of his bat. Photo: Ettienne van Rensburg