It is well reported that when it comes to maths and science, South Africa’s performance is among the worst in the world. Academics at the North-West University (NWU), together with the South African Teachers Union (SAOU) and the South African Academy of Science and Arts (SAAWK), are committed to improving the country’s mathematics and science statistics.


The NWU recently hosted the prize-giving ceremony and a fun day for the Science-in-Action and Mathematics-in-Action Olympics for Primary Schools in the North West Province.

The event was attended by the top-25 winners of the Science-in-Action and the Mathematics-in-Action Olympics, together with their families.

“The Mathematics-in-Action project was introduced six years ago by the SAAWK as a way to improve the standard of mathematics and mathematics education in South Africa at primary school level,” says Prof Ewert Kleynhans, NWU economics professor and national organising member of the olympics.

He adds that more than 3 800 learners from 248 schools participated this year. “This year’s Mathematics and Science Olympics were not only a great success, but also an excellent marketing and student recruitment opportunity for the university.” 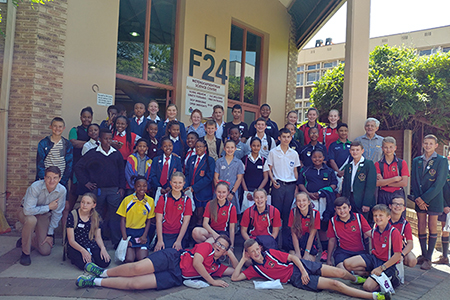 These students are the top-25 Mathematics-in-Action and Science-in-Action Olympics winners. NWU mathematics lecturer Prof Marthie van der Walt and Ingrid Esterhuizen from Laerskool Wierdapark were responsible for the preparation and final assessment for the Grade 6 and 7 mathematics papers.