Ilze goes all out to follow her sports dream

Ilze goes all out to follow her sports dream

Ilze du Plessis believes that your attitude determines whether your path through life is going to be thorny or strewn with rose petals. And if you look at the long list of accomplishments this 18-year-old first-year student at the Vanderbijlpark Campus of the North-West University (NWU) has achieved on the sports field, it is clear that she is focused on success.

“Disappointments will cross your path, but you must learn to process and deal with them,” Ilze says, and adds that this advice has come in handy on the sports field, whether in netball, ring ball, gymnastics or athletics. According to Amanda Dreyer, coach of the campus netball team, Ilze is a passionate and versatile sportswoman with a good sporting spirit. “She goes all out in everything she does,” Amanda says.

Her positive view of life and her natural sports talent have already led to many awards. Among other things Ilze boasts Gauteng colours in gymnastics and athletics, and also achieved South African colours in ring ball recently.

According to Ilze, she has been exposed a many types of sport since childhood. If you talk to her mother, Karen, and older brother Eugene, it is clear that the proverbial apple has not fallen far from the tree. In her heyday, Karen played netball for the former Western Transvaal, while Eugene is an accomplished sportsman boasting provincial colours in several types of sport.

Although the outbreak of the Covid-19 pandemic is hampering he participation in sport in her first year at university, she is still positive and cheerful about the future. “I try to maintain a healthy lifestyle during the lockdown. I skip regularly, follow a fitness programme and jog,” she explains.

This native of Vanderbijlpark looks forward to playing netball for the NWU again and intends completing extra sports courses in addition to her teaching studies.  She further plans to become involved in coaching schools netball, athletics and ring ball.

And what does she dream about? Playing for a senior provincial netball team one day. 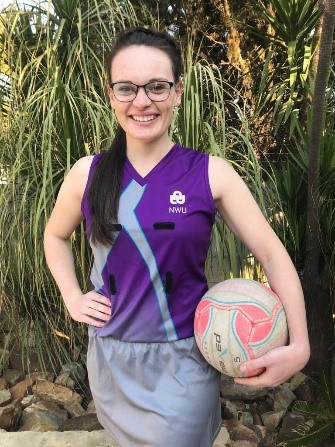