Game of Thrones does not play by the rules

Game of Thrones does not play by the rules

Game of Thrones breaks all the rules of film making. That is why it is such a huge success. “There are rules and laws of film making that you have to abide by, unless you want to create a specific effect,” says Phil Pretorius from the School of Communication Studies on the North-West University’s (NWU’s) campus in Vanderbijlpark.

He partly credits the success of the HBO series Game of Thrones (GoT) to the purposeful disregard of film-making rules.

According to this movie and television guru, the GoT series, which just released the second episode of its eighth and last season, has such a loyal following due to its producers’ purposeful choice of doing things differently.

On strong characters (and killing them)

GoT tells the different stories of a group of very strong, and often lovable characters. Phil refers for example to Ned Stark – a strong character with deeply rooted morals.

“When Ned is lost quite early in the story, the viewer is left shocked and confused,” he says. ”Seeing that the series is aimed at an intelligent audience, the interest of a critical viewer is stimulated in this way. It becomes clear that this series will keep you guessing, making it very hard to predict what will happen next.”

The story that GoT tells is very complex, including a rich history of fallen kings and kingdoms. By revealing the storyline slowly and purposefully, the intelligent viewer is kept interested in understanding the story and its origins.

The characters are shown for who they really are. A good character has some bad attributes, for example Ned Stark who keeps secrets from his wife. The opposite is also true, for example the conniving Tyrion who turns out to be a favourite character.

Phil says this is another rule that makes the audience uncomfortable and induces a new level of engagement. “It balances fantasy and reality, when all characters are not only good or only bad.”

“For a movie or series to fall within a certain genre, it has to contain certain elements,” Phil explains. “GoT contains numerous elements across different genres.”

He says the series first and foremost belongs to the fantasy genre, but definitely also relates to genres connected to drama, medieval, war, romance, horror, history, adult and thriller productions.

Phil believes that by combining elements of all of these different genres, the series appeals to a much wider audience, enticing the viewer to return for another episode. Even if the viewer does not enjoy every scene, each episode still offers enough satisfying viewing to keep the viewer interested.

Phil reckons half the success of the series is the hype created around it. “The influence of social media and peer pressure has been of immense value in making the series such a success,” he says.

The time between seasons have become longer, making the viewer wait and wonder what is going to happen next. Since the last episode of season seven aired in 2017, memes and theories going around on social media have certainly kept the series on the popular agenda. “Peer pressure is certainly part of it,” says Phil. “Since everyone is watching it, you are convinced that you can’t miss it.”

Although he is reluctant to make any predictions on who will take the Iron Throne in the end, Phil expressed his hope that Jon Snow’s moral values and belief in what is right will earn him some measure of victory.

However, the series has become known for employing elements of shock, which he believes makes it very difficult to make any predictions. “There are literally hundreds of possible endings, one of them seeing Jon Snow taking the throne. I do think this ending would however not be as popular with the viewers,” says Phil.

He reckons any of the Lannisters would be a fair guess, with Tyrion being a firm favourite, as would Bran and Arya. “The possibility of the Night King’s character evolving and revealing some kind of alliance unknown to the viewer, can also not be ruled out,” he speculates.

“I am looking forward to the rest of the series. The producers have employed some interesting production techniques and awe-inspiring special effects, creating something that will last long after the credits have rolled for the last time.” 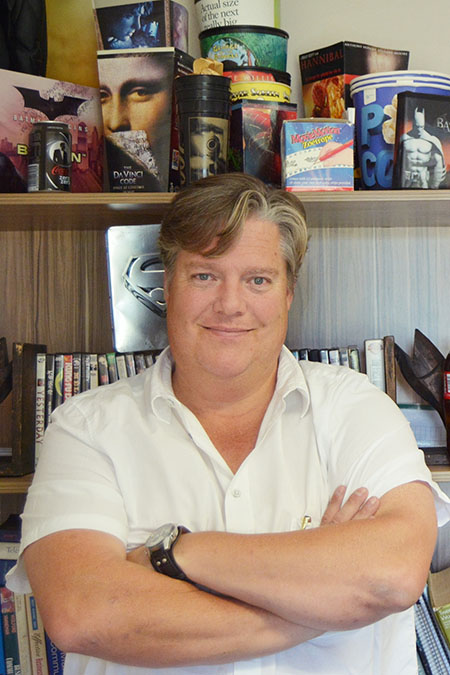 Phil Pretorius with some of the movie paraphernalia in the colourful office from where he conducts his research.

More about the expert

He completed his master’s degree with the title “Popular Culture and the Narrative: The case of the James Bond 007 films” at the University of Johannesburg.

Phil lectured at various institutions including Monash SA, Bond University, AAA School of Advertising, Boston City Campus, the University of Pretoria and the Vaal University of Technology. He is currently a lecturer in the School of Communication Studies on the NWU’s campus in Vanderbijlpark and is working on his PhD that focuses on character development.