Water researchers are on the move

Water researchers are on the move

The North-West University (NWU) is not only dedicated to achieving academic excellence and conducting ground-breaking research, but also to creating lasting partnerships.


The NWU’s unit for Environmental Science and Management and Bauhaus-Universität Weimar in Germany have built a rock-solid partnership that has resulted in revolutionary research.

Since 2017 the two institutions have been working on a study that will reduce waste and provide clean renewable energy, and will be finalised in 2020. The waste they are planning to use is manure, sewage and fecal sludge, which will be transformed into biogas.

Biogas is biofuel that is naturally produced from the decomposition of organic waste.

Prof Carlos Bezuidenhout from the Unit for Environmental Science and Management and one of the leaders of the project  recently led a delegation of 12 researchers to Bauhaus-Universität Weimar in Germany for the third WATNET workshop and retreat.

The aim of the retreat was to further strengthen  the partnership and to touch base with two NWU PhD students who have been conducting research in Germany for the past three months.

According to Prof Bezuidenhout the visit included a retreat to discuss current and future research, as well as various technical and cultural excursions that overlap with the research focus of the collaborators.

He adds that the highlight of the retreat was a high-profile talk and panel discussion on climate change titled “Climate Talk – A global waste affair”.

The official programme concluded with a strategic presentation to the president of the Bauhaus Universität Weimar, Prof Speitkamp.

The two universities signed a Memorandum of Understanding(MoU). “This MoU will be an important stepping stone to further strengthen our collaboration, especially regarding a planned master’s course on sanitation, which is currently being developed in the WATNET project under the leadership of Prof Bezuidenhout (NWU) and Prof Jörg Londong (Bauhaus-Universität Weimar),” said Prof Speitkamp.

The WATNET project is funded by the National Research Foundation in South Africa (UID 105825) and the Federal Ministry of Education and Research in Germany. This was the third retreat of the project and the second time it took place in Germany. The next and final retreat will be in 2020 in South Africa. 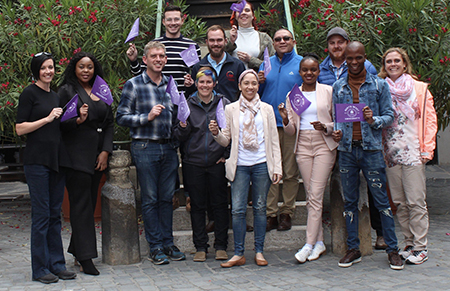 Prof Carlos Bezuidenhout with colleagues and students in Germany.