Research points the way to turn waste into biofuel

Research points the way to turn waste into biofuel

One man’s trash can truly be another man’s treasure. The North-West University (NWU), together with Bauhaus-Universität Weimar (BUW) in Germany, is working on ground-breaking research that will reduce waste and provide clean renewable energy.

The waste they are planning to use is manure, sewage and faecal sludge, which will be transformed into biogas*.

The research study, titled Network in Water and Wastewater at University Level (WATNET), is led by Prof Carlos Bezuidenhout from the NWU’s Unit for Environmental Sciences and Management and Prof Jörg Londong from BUW.

The four-year long study, which started in 2017 and will continue until 2020, is funded by the National Research Foundation and the German Federal Ministry of Education and Research.

It originated from a booklet on sanitation options that was produced by students at the German-South African Year of Science 2012/2013.

According to Prof Bezuidenhout, the NWU and its German partner are working on converting waste into extractable resources such as biogas and compost.

He adds that sewage and faecal sludge are a huge problem in South Africa and most people do not know what to do with this waste, so using it to produce biofuel will be a solution to the country’s long-standing problem. The residue (known as digestate) that is left from the waste will be used to produce agricultural products.

Prof Bezuidenhout says that town planners were brought onto the project to conduct research on city planning for the future. “They are investigating whether centralised sanitation is the best option for future cities and what sanitation options are being used in other countries.”
At the end of this research, the NWU hopes to develop a master’s degree in environmental management with specialisation in sanitation.

*Biogas is biofuel that is naturally produced from the decomposition of organic waste. 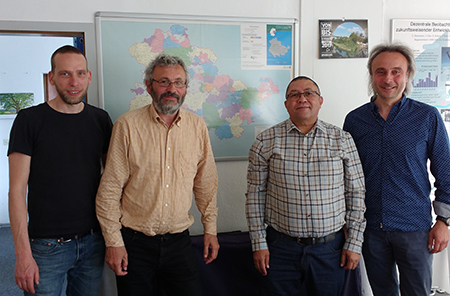