The research of a brilliant postgraduate student at the North-West University (NWU) is a breakthrough in the understanding of mitochondrial disease and identifying novel treatment options for patients.

“We now have a much better understanding of how the metabolism in the muscle tissue of these animals adapts to maintain energy production,” says Prof Roan Louw from the Human Metabolomics focus area at the campus in Potchefstroom.

Mitochondria are found in almost every cell in the body and convert the energy of food molecules into energy that powers most cell functions. Defective mitochondria lead to mitochondrial disease, a genetic disorder that causes debilitating physical, developmental and cognitive disabilities. Symptoms include poor growth, muscle weakness, seizures, vision and/or hearing loss, stomach issues and organ failure, Prof Louw says.

“Mitochondrial disease has a current minimum prevalence of one in every 5 000 live births and is therefore considered one of the most common errors of metabolism,” he adds.

He says the Ndufs4 knockout mice show typical mitochondrial disease symptoms, allowing the researchers to investigate the effect of the disease on muscle tissue. The altered metabolism in muscle was measured using highly sophisticated analytical equipment on the National Metabolomics Platform, also situated at the campus in Potchefstroom.

Brain but not muscle is affected
Prof Louw says specific research methods allowed for the comprehensive measurement of the metabolism affected by the disease.

“The results indicated an adaptive mechanism in the muscle of the knockout mice, allowing them to maintain muscle energy metabolism and avoid muscle weakness. Numerous metabolic pathways were identified where the ‘metabolic block’ caused by the disease is bypassed using the ubiquinone cycle.” (Ubiquinone is a vitamin-like substance that is made naturally in the body.)

He says although the Ndufs4 knockout mice are severely affected by neurological symptoms, the muscle seems unaffected by the disease.

“The findings from this study helped us to better understand why only the brain is affected in these animals and not the muscle. Next, we will attempt to exploit the identified metabolic pathways as a treatment option for the disease.”

Karin recently finished her degree with a final mark of 88%, which Prof Louw describes as an extraordinary achievement. He supervised her study, with Dr Zander Lindeque as her co-supervisor.

Prof Louw says Karin will now enrol for her PhD study. She will be using the findings from her MSc study to investigate the treatment potential of the ubiquinone cycle in mitochondrial disorders, all in an effort to better the lives of those suffering from this dreadful disease. 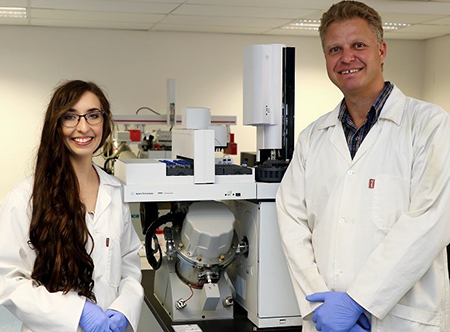 Karin Terburgh and Prof Roan Louw in the laboratory at the National Metabolomics Platform.