Puppet show with a twist

Puppet show with a twist

As the result of a research study at the Faculty of Health Sciences of the North-West University (NWU), the Hypertension in Africa Research Team (HART) recently presented a puppet show at the Potchefstroom Hospital to communicate information about the HIV virus.

The EndoAfrica study is a collaboration project between Stellenbosch University, the Medical University of Graz in Austria, the Hasselt University in Belgium, HART at the NWU, and the Walter Sisulu University. Among other things it aims to investigate the interaction between HIV infection, antiretroviral treatment and cardiovascular risk.

According to Prof Carla Fourie, chief researcher of this study, the EndoAfrica study also aims to determine how HIV and its treatment affect the interaction between communicable and non-communicable diseases in South Africa, where the incidence of both HIV and cardiovascular diseases is high.

According to Prof Fourie the puppet show, which was presented by the staff of HART, was a very big hit. “The doctor puppet encouraged the children to take their antiretroviral medication, even if it does not taste very good. We acted out that the human body has more red and white blood cells (the soldiers) than viruses. The children were furthermore treated with gift bags, which were also distributed among other patients,” she says.

“The project was a great success, and I want to thank everyone who helped to make this possible.”

The project was presented for the third consecutive year in collaboration with the Potchefstroom Hospital’s Aids day activities, and this year the puppet show was part of the project for the first time.

Worldwide 36,9 million people live with HIV. Two thirds of the 1,8 million new infections in 2017 were in sub-Saharan Africa, where 53% of the world population with HIV lives.

The EndoAfrica-NWU study indicated that people living with HIV often interrupt their treatment – this practice can lead to drug resistance and also to higher viral counts, which in turn play a role in the high incidence of HIV. 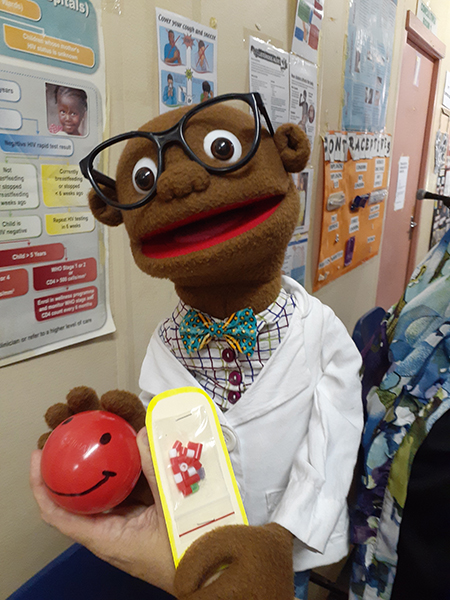 The NWU’s Hypertension in Africa Research Team’s (HART) doctor puppet encouraged the children in Potchefstroom Hospital to take their antiretroviral medication, even if it does not taste very good.