Losing a limb is certainly a traumatic experience. Making matters wors is that it usually goes with astronomical medical bills. Although the last thing that you would want to worry about is having sufficient funds to afford a prosthetic limb, this is a great concern for most people who have lost a limb.

The North-West University's (NWU) Faculty of Engineering is now trying its hand at manufacturing prosthetic limbs so that they can be sold for a fraction of the usual price. The main aim is to assist people for whom a new arm or leg would otherwise remain nothing more than a dream due to a lack of funds.

CP Kloppers, project manager and lecturer in the School of Mechanical Engineering, says this idea was the brainchild of a colleague, Danie Vorster. “I know that we have the necessary expertise, and even though we lack experience, it is still worth trying,” says Danie.

CP reached out to Theunis Nel, presenter of the TV motorbike programme Woema, who was involved in a serious accident in 2014. Theunis's injuries were so severe that his right arm had to be amputated. “Theunis and I sat around a table and discussed our initiative to manufacture prosthetic limbs. Theunis was very positive about it and I immediately offered to build him a prosthetic arm as a pilot project.”

The NWU has an ultramodern and sophisticated 3D printer with a price tag of almost R2,5 million. Now CP and a master's degree student, Jako van Rooyen, want to design a prosthetic arm and build a new plastic arm with the 3D printer.

“We were able to borrow a prosthetic arm from one of Theunis's friends. He imported it from Canada a few months ago, and paid almost R60 000 for it. We examined the arm in our workshop for three months. We reverse-engineered the arm by taking it apart, and measuring, drawing and redesigning all the parts. We are still in the process of manufacturing the arm, and it looks like it is going to be a major success,” says CP.

According to their planning, the prosthesis should be ready and approved by the end of June. "We have already designed and made a prototype from plastic and aluminium, and it worked perfectly."

Faculty to help with customisation

Theunis recently visited the NWU's Potchefstroom Campus to look at the progress being made with the prosthetic arm. He was taken by surprise when CP informed him that they were not only going to build him a new arm, but that they were also busy with a project to customise and modify his motorbike so that he will be able to ride it again soon. This project should also be completed by the end of June. What's more, the faculty will be providing technical support for the customisation of a second motorbike. Theunis says he and a friend will use these motorbikes to travel across South Africa and do missionary work.

The School of Mechanical Engineering has applied for funding from a national public entity that stimulates and supports technological innovation. This entity's role is, among others, to bridge the gap between research and development. CP says they are still waiting to hear whether or not their application was successful.

“Additional funding will open up the door to the manufacturing of prosthetic limbs and supply them to people who cannot afford the expensive and usually imported prostheses," he says. "I realise that a lot of water still has to flow under the bridge, but this initiative will not only make my own dream come true, but also hundreds of other people's dreams.” 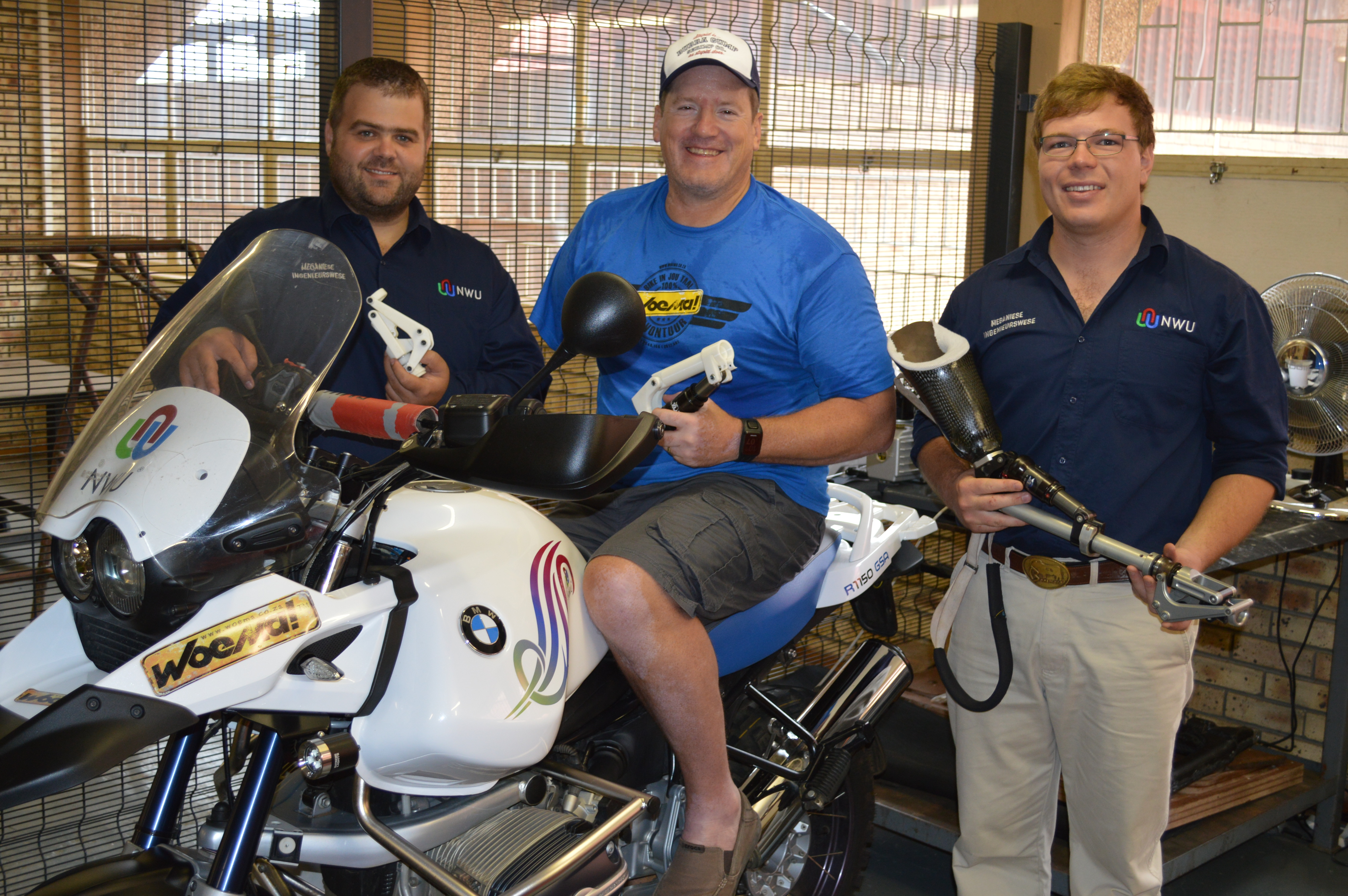 CP Kloppers, a lecturer in the School of Mechanical Engineering, with Theunis Nel and master's student Jako van Rooyen. They are manufacturing a prototype prosthetic arm for Theunis and also plan to modify the motorbike in such a way that he will be able to ride it. 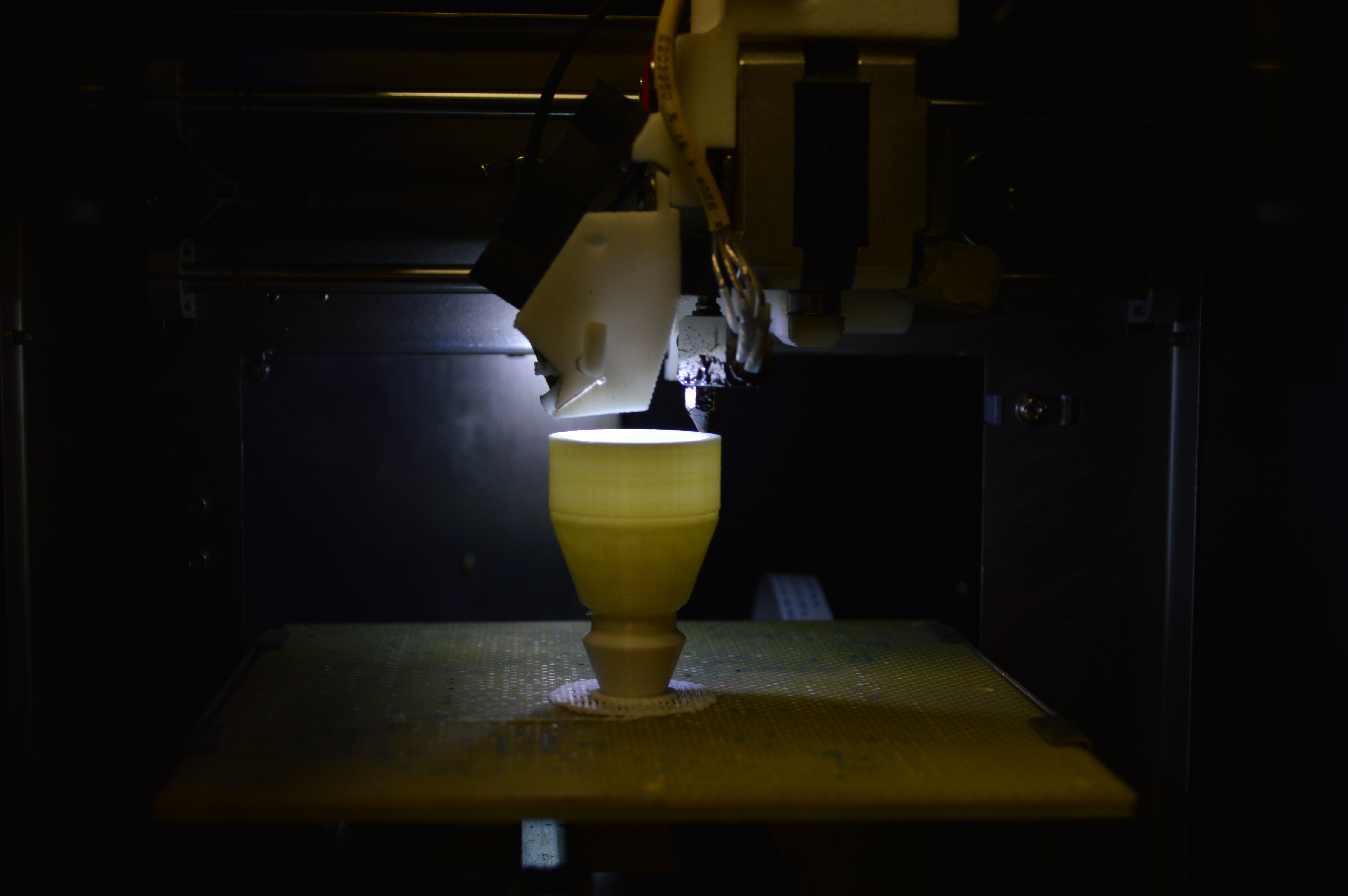 One of the components of the prostetic arm being manufactured by the 3D printer. 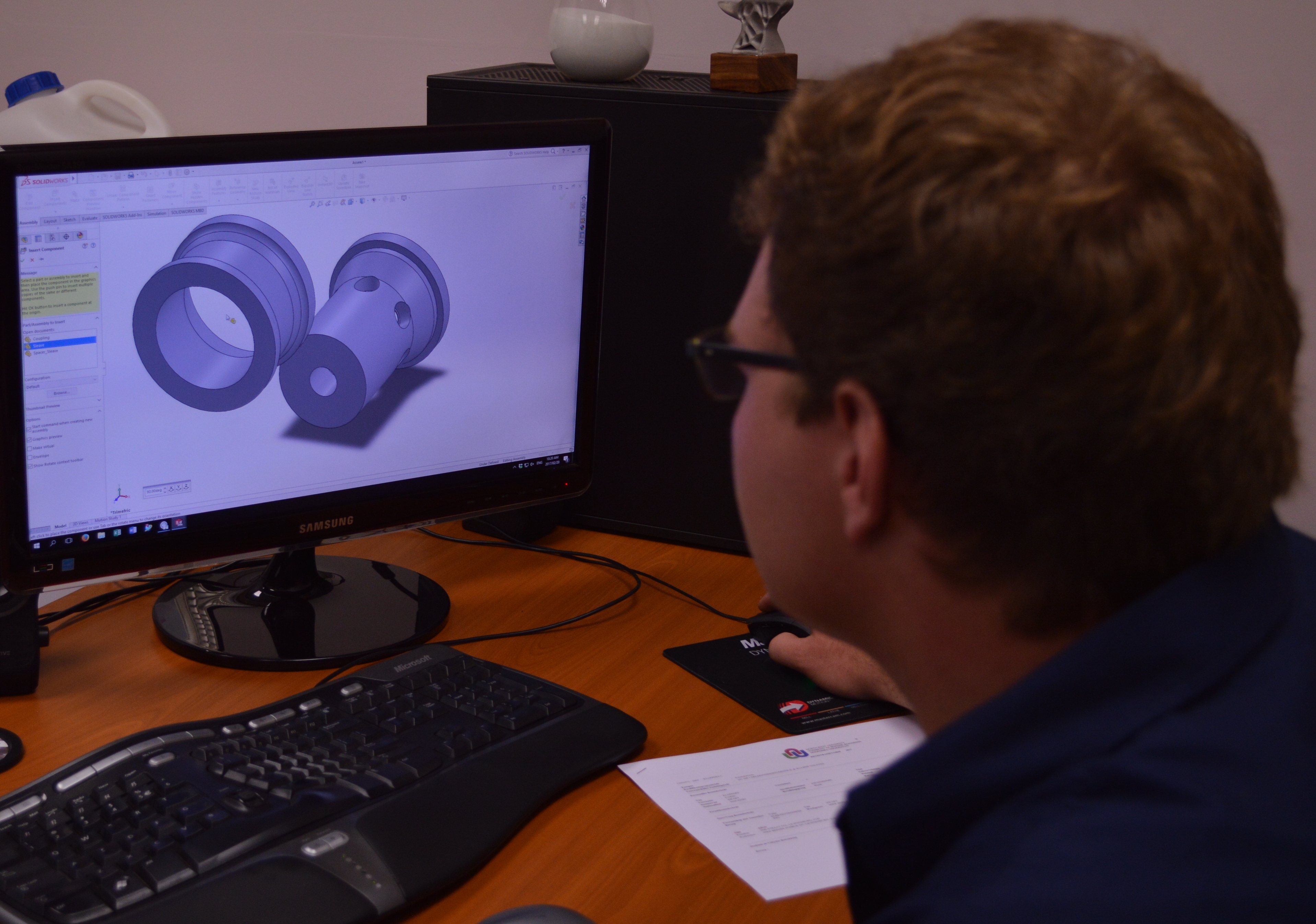 Jako van Rooyen,  a master's student in mechanical engineering, is busy with the design of the prostetic arm.