Although the BHSc degree in occupational hygiene is relatively new to South Africa and Africa, the North-West University (NWU) recently raised its hand and received excellent praise and accolades in the global arena in this discipline.

The prize was recently awarded to NWU student Carol-Mari Schulz during a ceremony held on the campus in Potchefstroom.

In addition to the IOHA award, she received the Fritz Eloff-Petrus Laubscher floating trophy. This trophy carries the names of the two NWU academics who were historically responsible for establishing and developing occupational hygiene as a subject field at the university. The trophy itself is a concrete test block from the occupational hygiene facility that was built on the campus in 2018.

According to Prof Johan du Plessis, director of the NWU’s Occupational Hygiene and Health Research Initiative, education and research in the field of occupational hygiene dates back to the 1970s.

“Initially, an honours degree was offered, and this was later followed by a master’s degree. In 2013, the need for a specialised bachelor’s degree was identified, and the degree was approved in the South African higher-education framework in 2015,” he says.

“The four-year professional BHSc degree in occupational hygiene, the only one of its kind in Africa, is scientifically designed to educate and equip students with the necessary knowledge and specialised skills (including problem-solving and the relevant competencies) required to become occupational hygienists.”

This involves training students to be able to anticipate, recognise, evaluate and control health hazards in the working environment, with the objective of protecting workers’ health and well-being, and safeguarding the community at large.

The first cohort of students registered for the BHSc in 2016 and will graduate in March 2020. In 2019, exactly 100 students were registered for this degree (in total over the four study years), and at least five were from Namibia and Zimbabwe.

If one considers that there were 893 individuals registered as members of the Southern African Institute for Occupational Hygiene (SAIOH) at the end of 2018, the addition of 100 graduates in the near future will make a significant human resource contribution to the field, which is responsible for rendering occupational hygiene services to a formal workforce of approximately 16 million workers in southern Africa.

Carol-Mari’s immediate future plan is to enrol for a master’s degree in occupational hygiene at the NWU during 2020.

Prof Fritz Eloff, Carol-Mari and Petrus Laubscher issued a joint statement of appreciation: “We sincerely thank the IOHA for the sponsorship of this award. As a university, we share the vision of the IOHA in promoting occupational hygiene as a profession. We are of the opinion that this degree will make a significant contribution to the advancement of occupational hygiene in South Africa and Africa.” 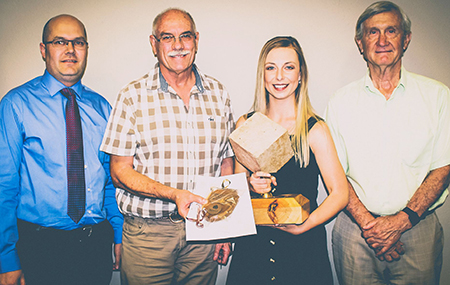