Not with a whimper, but with a bang. Forgive the reversal of TS Eliot’s immortal words, but that is how the North-West University (NWU) ended the round-robin stages of the Varsity rugby tournament with a runaway 74-15 win over valiant but overmatched Wits on Monday night, 1 April in Potchefstroom.

Schalk Hugo slotted eight conversions and a penalty to steer the NWU the overall third position on the Varsity Cup rugby log behind Maties and Tuks. Hugo was also named the Player that Rocks.

The NWU won six games from eight clashes, the same as Tuks, while Maties remains undefeated. Tuks has a draw to their name and ends their campaign on 30 log points, one more than the NWU.

Maties have 38 log points and Shimlas 22. This means Tuks will face the NWU in one semi-final with Maties taking on Shimlas in the other.

The NWU will do well to forget their last encounter with Tuks when the Pretoria-based side won 28-0 in Potchefstroom. The NWU will have to be at their very best when the sides meet again at 16:45 on Monday 8 April at the Tuks Stadium. A daunting task awaits. 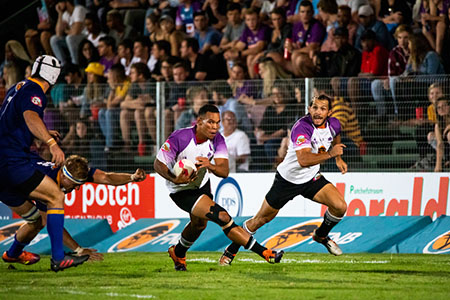 Liam Daniels is in full flight against Wits on the Fanie du Toit sport grounds in Potchefstroom.