NWU researcher is finalist for 2018 Women in Science Awards

NWU researcher is finalist for 2018 Women in Science Awards

Prof Ilani Loubser, an associate professor at the Centre for Space Research and also the subject chair of physics at North-West University's (NWU's) campus in Potchefstroom, has been announced as a finalist in the Department of Science and Technology’s (DST’s) South African Women in Science Awards (WISA).

These annual awards recognise and reward the excellent work done by women scientists and researchers, and profile them as role models for younger women.

Prof Loubser’s research focuses on the formation and evolution of massive elliptical galaxies, with emphasis on the dominant galaxies in galaxy groups and clusters.

Her leading-edge observational studies, using telescopes such as the Southern African Large Telescope (SALT), the Gemini telescopes in Hawaii and Chile, and the Canada-France-Hawaii Telescope, led to her being awarded the 2017 Henri Chrétien Award for observational astronomy by the American Astronomical Society.

Prof Loubser is strongly committed to training the next generation of South African astronomers, and since 2010 has successfully mentored three postdoctoral fellows, graduated two doctoral and six master's students, and supervised eight honours projects, all at the NWU's Centre for Space Research.

Her current research projects put a strong emphasis on using and training students for South African research facilities, including the SALT and other Sutherland-based telescopes, the MeerKAT radio telescope, and ultimately the Square Kilometre Array.

She has chaired the South African National Committee of the IAU and the Astrophysics and Space Science Specialist Group of the SAIP. She has served on various other national committees, including the South African Astronomical Observatory's Scientific Advisory Committee, the SALT Task Team and Time Allocation Committee, and the National Astrophysics and Space Science Programme Steering Committee. 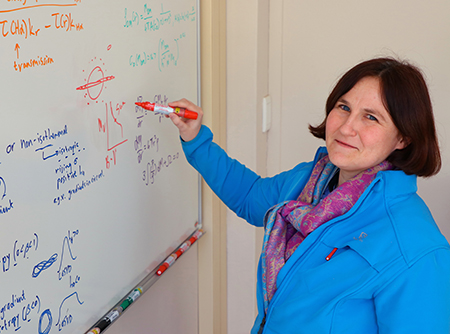