NWU IT: From humble beginnings to huge accomplishments

NWU IT: From humble beginnings to huge accomplishments

As Dr Cobus van der Walt slowly rises, the muttering in Room 305 is replaced by a quiet reverence.

The former director of Information Technology at the North West University’s (NWU’s) campus in Potchefstroom commands the type of admiration reserved for those select few who have dedicated their lives to the pursuit of excellence.

Today the NWU is not only celebrating the department’s great strides through the years but also the publishing of the book, History of Information & Communication Technology 1967-2003, of which Dr Van der Walt is the co-author.

Boeta Pretorius, the current IT director explains that the idea for the book started in 2013 and gained momentum in 2015. “If all goes according to plan, there will be a second edition that will include the campus in Mahikeng and a third that covers 2004 and onwards.”

A career full of adventure

“I’ve had the privilege to have had a career full of adventure,” says Dr Van der Walt. “I was the first staff member to be send to the SANAE research base in Antarctica, and I visited the weather station at Marion Island.

“Then came the adventure of the computer world. I had the pleasure in the 1990’s of guiding IT from the periphery to the heart of the university.”

On 28 September 1966 the university Council confirmed the establishment of the Department Information Technology at the then Potchefstroom University for Christian Higher Education.

The first computer, an IBM 1130, was ordered in July 1967 and it had a “mammoth” 32 kilobyte memory. It also had a 1MB removable disk, and programs were uploaded with a punch and a card reader. From then onwards, to paraphrase Bob Dylan, “the times they started a changing”.

“Those punch cards took a day to compute,” remembers Boeta with a smile. “It was a very tedious way; waiting times were measured in days!”

Between 1968 and 1969 the university’s salary system was written and implemented, and this system was in use until 1996.

A powerhouse of performance

These humble beginnings blossomed into the powerhouse that IT is today. Now the department oversees 4 000 computers in laboratories across the NWU and serves 14 000 WiFi users simultaneously per day. Thanks to IT the NWU now boasts the second fastest internet access of any university in South Africa.

The story also goes that the very first email in South Africa was sent from the NWU to Rhodes University in 1989.

Back to the present

Prof Daryl Balia, deputy vice-chancellor of the campus, says he is proud of IT’s accomplishments. “This is proof positive that there are departments and staff at the university that do their work because it is a labour of love, and not just for the pay check.”

IT surely remains at the heart of the NWU, regulating the pulse that now feeds almost every conceivable function of the university. 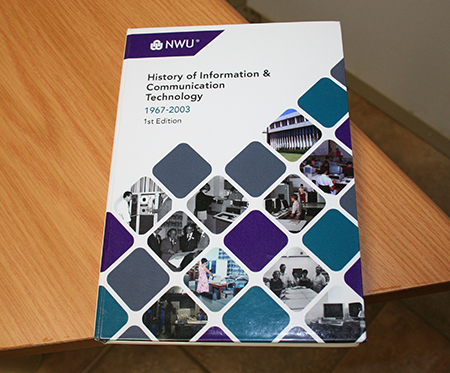 The history of 36 years’ hard work. This book celebrates the birth, growth and accomplishments of the NWU’s IT department. 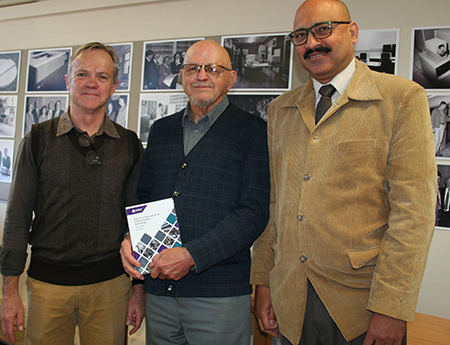