The aim of this discussion was to share knowledge with students and to ensure they understand the IKS Centre’s goals and its role in academia.Various stakeholders and knowledge holders who are closely linked with the IKS Centre, IKS students and staff members in the IKS Centre attended the event. Dr Mochokolo Zulumathabo Zulu presented on African indigenous ethno-mathematics and metaphysics using storytelling and narratives.

Dr Zulu, a renowned author of various books including a Sesotho mathematics dictionary, explained how ethno-mathematics is practiced by Africans.

IK expert, knowledge holder and organic farmer Dr Kgoroeadira – affectionately known as mama Kena – then spoke about being an indigenous knowledge scholar.She explained that students should study IKS to promote the value thereof and to foster sustainable developments.

“Students studying IKS should set goals to develop the communities from which they come,” she added.

Ngaka Mooki, a traditional healer, addressed students on the value of African spirituality, food and beverages, which links the spiritual aspect of people to that of their ancestors.Kgosi Mogakolodi Masibi, a chief and traditional leader of the Batlharo baga Masibi, presented on the role of traditional leaders and their institutions in the local governance of Africans living in rural indigenous communities.

He explained that traditional leaders have an important role to play and that government should take them seriously.

“IKS scholars and graduates are relevant people to influence policy and policy makers in recognising traditional leaders and their institutions in the democratic dispensation,” said Kgosi Masibi. 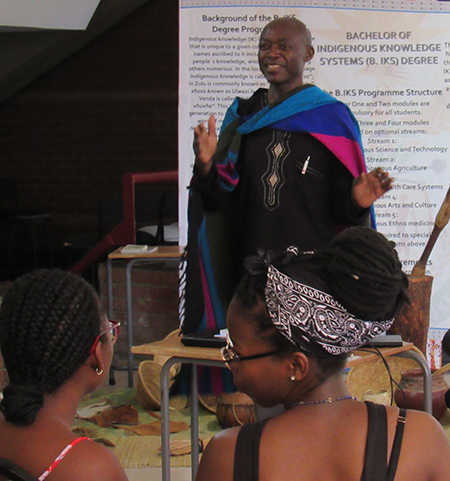