Final-year students from the School of Chemical and Minerals Engineering at the North-West University (NWU) recently had the opportunity to show that their course entails much more than poring over their books.

These aspiring engineers competed against one another to see who could produce the best beer, cheese or chocolate.

Although producing these products forms part of the annual curriculum, the Faculty of Engineering decided that this module should not stop at the theory in the classroom.

Professor Quentin Campbell, director of the School of Chemical and Minerals Engineering, attended this day in person to show his support to these students.

“The beer, chocolate and cheese competition is held to show that academic activities need not be boring,” says Prof Campbell. “Engineering focuses on empowering the students to showcase the theory that we teach in class in a practical manner. If one can have fun while doing it, all the better.”

Route 96, a local brewery in Potchefstroom, made their facilities available to the faculty for this function. It was the most suitable place for the students to not only present their own beer, but to also learn from professional craft beer producers in our midst.

Marco van Deventer, manager of Route 96, was very chuffed with the attendance on the day. “In future I would like to give the students a tour of our brewery before they start making their own beer, just to share a few tips from the industry with them.”

The day started with students running about to decorate their own stalls according to the theme of their beer. Among the Chemical Engineering students each group had to brew a beer and make two kinds of cheese – a hard cheese and a soft cheese.

The Mineral Engineering students’ assignment took them to chocolate and liqueur, where a lot of interesting combinations saw the light.

The excitement was high when the judges stood ready to review every beer, cheese, and chocolate. There was a panel of judges where a few well-known Potchefstroom faces could be seen – among others Fanie Smit of Garnish catering services, Lukas van Deventer, owner of Route 96, and André Swanepoel, representative of the craft beer guild of Potchefstroom.

“The general feeling of the judges was that this year’s standard was much higher than that of last year,” says André Swanepoel. “This year’s Chemical Engineering students impressed the judges with their high-quality beer that was presented excellently.”

He also mentioned the importance of involving external judges and moderators. “The public is also invited to come and give their opinion about the beer. This is an important process for the continuation of the curriculum. I am also very excited about the contribution that this event makes to the culture of craft beer in Potchefstroom.”

The overall winner of the beer brewing was the team called VaalBrau. The team consisted of Caitlin van der Merwe, Rainere Cilliers, Kelebogile Chokoe, Albert Hartley, Chanelle-Marié Koen and Leandri Dekker. This group of final-year students made an American Pale Ale that won them a first place. VaalBrau’s hard cheese, a gorgonzola with three different flavours – a chilli, an apricot and a fig – also won the first prize.

The John Beer group won the prize for the best soft cheese with their presentation of a pepper Feta. Nikki van Tonder, Marcus Keulder, Schalk Kok and Julian Pretorius are the proud members of this group.

Jonedine van der Merwe and Anel Scheepers walked away with the first prize for chocolate and liqueur.

Of course, a genuine Beer Pong League was part of the day after all formalities were completed, and the students and the public could end their day on a high note. 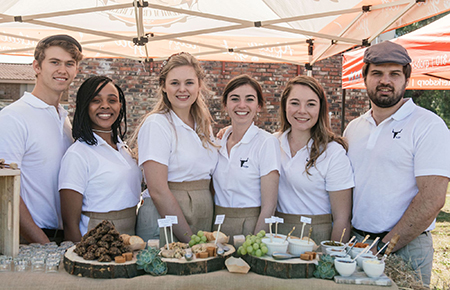 The group VaalBrau took honours for the best beer.

Watch this video about the annual beer and cheese day