The United Nations General Assembly, during its 74th Plenary Meeting on 20 December 2017, proclaimed 2019 as the International Year of the Periodic Table of Chemical Elements (IYPT 2019).

As we commemorate the 150th anniversary of the establishment of the Periodic Table of Chemical Elements by the Russian scientist Dmitri Mendeleev, the North-West University’s (NWU’s) Science Centre - in association with National Science Week (NSW) 2019 - hosted a public lecture.

The lecture took place on 29 July 2019 on the campus in Mahikeng and formed part of the annual NSW activities.

NSW aims to promote awareness in science. This initiative of the Department of Science and Technology is a countrywide celebration of science involving various stakeholders conducting science-based activities during the week of 27 July to 3 August.

The lecture titled “Is Mendeleev’s Periodic Table the best scientific idea ever?” was presented by Prof Mike Bruton, who has extensive experience in interactive science centre conceptualisation, design, implementation and operation at regional and international level.

Prof Bruton’s talk covered various topics including what is science?; what is a great scientific idea?; early studies of the chemical elements, and how Mendeleev developed the Periodic Table.

He said that Mendeleev’s Periodic Table was an important science breakthrough because he realised that the physical and chemical properties of elements were related to their atomic mass in a “periodic” way. Mendeleev arranged these so that groups of elements with similar properties fell into vertical columns in his table.

“Mendeleev also made predictions on gaps when arranging elements, but he didn’t see it as a problem. He thought it simply meant that the elements which belonged in the gaps had not yet been discovered,” explained Prof Bruton.

“The International Year of the Periodic Table aims to recognise the Periodic Table of Chemical Elements as one of the most important and influential achievements in modern science reflecting not only the essence of chemistry, but also of physics, biology and other basic science disciplines,” concluded Prof Bruton. 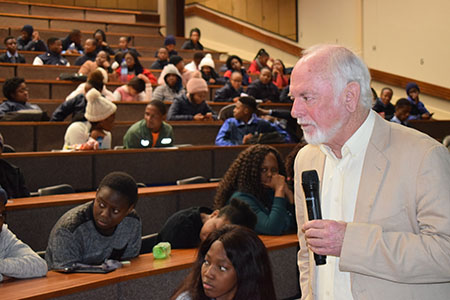