The limit does not exist for Selouna

The limit does not exist for Selouna

A determined young graduate has overcome a mobility disability and other challenges to obtain her BSc Hons degree in information technology during the autumn graduation ceremony in March 2019.

Selouna Visser, who is just 24 years old, suffers from a muscular illness called Spinal Muscular Atrophy, level 3 – also referred to as “Kugelberg Welander”. This genetic muscular illness is characterized by the weakening of muscles.She was diagnosed with Spinal Muscular Atrophy just a month before she turned two. She could walk up until the age of seven years and become completely wheel-chair bound in October 2002.

Despite having limited movement in her upper body and not being able to lift heavy object such as her laptop and text books, Selouna has never let it stand in the way of anything she wanted to achieve.

Selouna has successfully made her way through life on her own terms. “I always strive to be independent and do as much as I can for myself. I never want to worry my parents unnecessarily,” she emphasizes. She matriculated from Ferdinand Postma High School in 2013, obtaining two distinctions and receiving three merit awards from the North West Provincial Department of Education.

A passion for life and helping others

Selouna has a passion for life and helping other disabled students. She is a student assistant in her department, motivational speaker and has also been involved in various projects at the Unit for Students with Disabilities on the campus in Potchefstroom.

“I just want to be an example to other disabled people and show everyone that disabilities do not and should not define us,” she says

“With my first graduation I was very anxious because I didn’t really know what to expect but this time around it was much easier and I was more relaxed, “Selouna says.

She is currently busy with her master’s degree and wants to specialize in data warehousing and business intelligence.

With her iron will to succeed, there is no doubt that Selouna will accomplish great things in the future. Her life proves yet again that disability does not equal inability, especially when it comes to education, which is important to everyone. 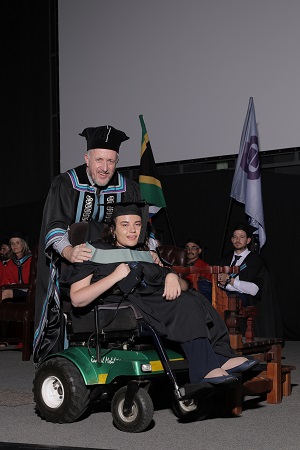