Game, set, match: NWU and TSA are ready to serve

Game, set, match: NWU and TSA are ready to serve

The North-West University (NWU) and Tennis South Africa (TSA) will be the centre of attention when they host the Potchefstroom Open, an Association for Tennis Players (ATP) Challenger 50 event.

This tournament will take place from 9 to 15 March at the Fanie du Toit sports grounds in Potchefstroom. With close to 200 players from around the globe participating in this tournament, it promises to be an exhilarating experience.

According Helene Botha, sports manager at the NWU, players from as far as Germany, Israel, India and France will be taking part in the event.

“The NWU, with its resurfaced courts, is fast becoming the home of tennis. The last time we hosted a tournament of this magnitude was in 2011,” says Helene.

The ATP 50 challenge is for men only, but Helene says the NWU and TSA also decided to host the women’s Ilana Kloss International Week Two at the same time.

“Hosting an ATP at the NWU is a real privilege, especially since the last ATP Challenger to be hosted in South Africa was held in Soweto during 2013,” adds Helene.

Currently the NWU tennis courts are packed with younger players from various countries. The NWU and the Riaan Venter Tennis Academy are hosting two Grade Five tournaments for children under 18 from 17 to 29 February.

Helene says the junior players are using these tournaments to gain points for their International Tennis Federation (ITF) rankings, which will help them qualify for higher ranking tournaments.

“Unlike their European counterparts who have access to a number of qualifying tournaments, these type of tournaments are especially valuable to South African players,” she says.

Soon after the Grade Five tournaments, the NWU Open for men and Ilana Koss Week One for women will be hosted at the NWU from 1 to 8 March. With prize money of $25 000 per gender group, these tournaments promise to be nothing but entertaining.

By the time these tournaments come to a close, the NWU tennis courts will have accommodated approximately 400 players.

The NWU is proud to be part of tournaments of this magnitude - read the press release here. 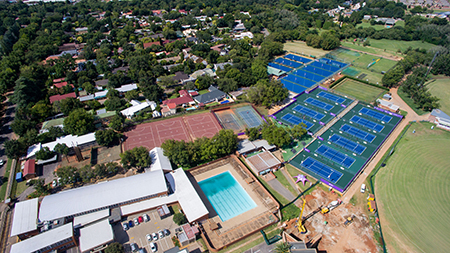