“I am not ‘moedeloos’ (in despair). I haven’t lost hope for the future but I am deeply concerned about where we are at the moment.”

These are the words of former president, Nobel Peace Prize laureate and former chancellor of the North-West University (NWU), Mr FW de Klerk. He said although he is worried about the position the country finds itself in, he does see light at the end of the tunnel.

He gave a public lecture on 28 November at the university’s campus in Potchefstroom as part of the 2019 conference of the Ecclesiological research group of the Faculty of Theology.*

“I see President Cyril Ramaphosa asserting himself a little bit more and more. He is beginning to strengthen his position. He is moving in the right direction and that for me is positive.”

Mr De Klerk said he remains positive about the capability and capacity of South Africa to work itself out of the bad place he feels it is currently in.

Education is the starting point

“We stand a good chance of bringing this country to fulfil its full potential and creating a society where each individual will be able to reach their full potential.”

He believes the starting point must be education and training. “We do not need to put more money into it, but we need to make sure that the money is well used. The problem is not the size of education but the quality of education.”

Leave religion to the church

During the question-and-answer session after the lecture, one of the issues raised was of people starting unconventional churches and how this relates to the Constitution.

“I still believe in the freedom of religion. South Africa has a wonderful track history in that regard because we have never had religious conflicts.”

The former President said he does not believe the Constitution should prescribe what a church should be.

“The church must sort the religious side of life out. The government must create the space for the church to do this. The diversity of churches in South Africa should come together and, in one voice, draw the lines.”

Prof Dan Kgwadi, vice-chancellor, said that the NWU, as Mr de Klerk’s alma mater, was honoured to host him. “Your courage to transform and take bold and decisive decisions, as you did at a crucial point in the history of South Africa, is an inspiration.”

The NWU too has had to make bold and decisive decisions about transforming the NWU and creating a unitary institution.

“It was not easy, but I can attest that the Good Lord has been with us through everything.” He said that the many successes of the NWU are proof of that. “After going through a vigorous transformation process, we have enjoyed a number of successes in terms of our national and international ratings and rankings.

“We are doing well and you can be proud to be still associated with us,” he told Mr de Klerk.

*The Ecclesiological research group’s conference took place from 27 to 29 November. This year’s theme was reformation theology and its impact on world societies after 500 years. It dealt with issues of everyday justice and how one’s aim to do what is good, just and fair is guided by one’s most basic beliefs or worldview.

Former President FW de Klerk was invited to give the public lecture in the light of his experience of making complex decisions in times of transition, emphasising fairness and justice. 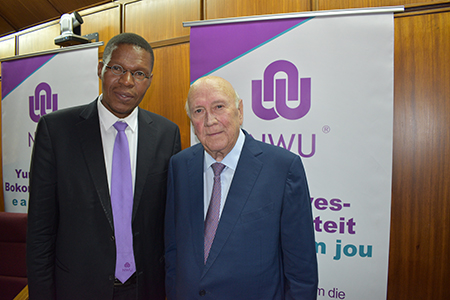