The Institute of Psychology and Wellbeing at the North-West University (NWU) and Autism South Africa (A;SA) will soon host their fourth Autism Symposium.

The symposium, which has grown into a national event, is not only for academics and professionals who work with autism, but also offers people on the autism spectrum the opportunity to share their experiences.

This year’s symposium will take place on 8 and 9 July and offer support to families, parents, medical care staff, social workers and employers involved with children and adults on the autism spectrum.

“One thing we have learned from the symposiums is that people living with autism are the true experts and that their contribution is valuable in promoting a positive attitude towards neurodiversity,” says Hanlie Degenaar, a therapist at the Institute for Psychology and Wellbeing.

Reflecting on last year’s symposium, Melt Olckers, an autistic adult, said he was honoured to have been part of it. “Listening to others on the spectrum about their experiences was a learning experience, not only for me and the others who were part of the session, but also for the group of students who listened to us.”

Melt also realised that just as people with autism need to listen to professionals, the professionals should also listen. “We must have a reciprocal relationship – a relationship that can go both ways.  We can teach them about us and they in turn can teach us the skills we need.”

Emile Gouws, who has autism and was one of the speakers at last year’s event, says each speaker contributed in their own unique way, helping to expand understanding people whom autism affects on a daily basis.

“By attending and speaking at the symposium, I was firstly amazed at how many educators from the broader education system attended and supported the event,” says Emile. “It provided perspective and added lots of power to my personal mission as a driver of education to include more learners on the autism spectrum in mainstream schools.”

He says the symposium gave him insight into the different challenges and uniqueness of each autistic child and parent. “As a PhD student, my initial goal is to specialise in autism. Through this learning experience, my knowledge grew and I also became aware of the variety and diversity of the diagnoses that can be made.”

The organisers of the national Autism Symposium are also planning to accommodate requests for short practical workshops on 6 and 7 July, before the seminar starts on 8 July. The workshops will be for anyone interested in attending and will include themes such as challenging behaviour, friendships, reading development, sensory profiles and the use of social stories.

More information on the event is available from the Institute of Psychology and Wellbeing at 018 299 1737 or IPWinfo@nwu.ac.za.

Autism is not a rare condition. According to the United States’ Centre for Disease Control and Prevention (CDC), one in 59 children have been identified with autism spectrum disorder (ASD).

It is about four times more common among boys than among girls, and researchers are finding that girls present symptoms that might differ from those found in boys, leading to later diagnosis.

Autism can be diagnosed reliably as early as age two and many parents will raise concerns before a child’s first birthday. Most children are only diagnosed after the age of four, however.

Each and every child with ASD is unique, and people with ASD differ as much from each other as all people do.

Research shows that bullying of children with autism is extremely common, affecting nearly two-thirds of children aged six to 15.

People on the autism spectrum often live in the moment, rarely judge others and are truly passionate about their interests.

Families of youngsters on the autism spectrum often say that side by side with the many challenges experienced, having a family member with autism can have a profound positive impact on their perceptions and beliefs. Instead of buying into all the “ought to” and “should do” rules in modern society, they appreciate every small achievement and live in the moment.

A diagnosis of autism is also linked to an increased risk of having mental health difficulties. For example, anxiety affects between 10% and 40% of children and adolescents on the autism spectrum.

Although new treatments for autism are being researched all the time, no medication-based treatment has been identified for the core symptoms of autism. Medication is usually used to treat conditions associated with autism, such as anxiety.

Getting to know a person with autism is not that difficult – just allow them a bit of extra time to respond in conversations, and enjoy their different perspective on the world. 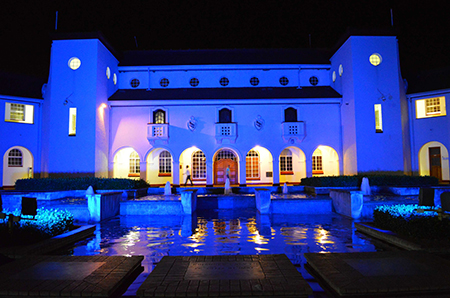 Every year, to coincide with the Autism Symposium, a building on the NWU’s campus in Potchefstroom is highlighted in blue to promote autism awareness.