“If all of us were to say ‘We are all in’, it will be a good transition to the new dispensation.” That was the appeal made by the Rector of the Potchefstroom Campus of the North-West University (NWU), Prof Fika Janse van Rensburg, at the official opening of the academic year.

“This year we are continuing the relay race that started last year. The difference is that we are now much closer to passing on the baton to the new management.

“2016 was a good year. Had it not been for the NWU staff, students and student life, as well as our Mandate Giver, we would not have been able to declare at the end of the year that our cup was overflowing.”
According to him, the core business was very healthy, with research outputs that went up fifteen percent, the number of NRF-rated staff members that increased by sixteen, 51 more doctorates that were awarded and more than fifty percent of academic staff who now hold doctorates.

Van Rensburg also said that the campus took in approximately 4 540 new first-years, which is 200 more than the target set for 2017 and which increases the total number of contact students to more than 29 500.

He also boasted with students' excellent sports and cultural achievements. For the first time in the history of the Varsity Sports series the NWU is the holder of all three trophies – in rugby, cricket and netball. Last year the NWU-Pukke were also the USSA champions in karate, badminton and athletics. Two of the NWU-Puk teams went through to the finals of the National Debating Competition and Caput Men's Residence won the National Sêr Competition.

“Through mutual trust, cooperation, enthusiasm and faith we will make 2017 an unbelievable year. On our knees, aware of our deep roots and with our eyes fixed on our eternal destiny, we will ensure that the dispensation that starts this year will make the NWU flourish.”

The Vice-Chancellor, Prof Dan Kgwadi, said in his message that staff should not ask what the University can do for them, but instead what they can do for the University to make the institution into an even greater success. “In doing so, you will find the true meaning of your job at the NWU.”

He said that a lot of time and energy had gone into the formulation of a new strategy and structure for the NWU, which positioned the university to move forward as a unitary university.

“As soon as the Minister of Education signs the statute, we will proceed with the appointment of Deputy Vice-Chancellors on the three campuses, although Prof Fika Janse van Rensburg will lead the Potchefstroom Campus until the end of the year.” That will be followed by the appointment of the executive deans, academic directors and deputy deans.

Kgwadi emphasised that, apart from the restructuring, the purpose of the NWU was still to excel in innovative learning and teaching and cutting-edge research, to benefit the community through knowledge.
“We will achieve this by dynamically adapting to changes and new challenges. If not, we will fall behind. Universities are increasingly competing within a global context. The higher education environment is changing rapidly and significant technological changes will have a profound effect on us in future.

“We have to ensure that our qualifications stay relevant, responsive and of high quality, which means that we have to constantly adapt and innovate,” said Kgwadi.
“We have to lead by identifying and growing new technology and science frontier flagships.”

He also said that it is important that the NWU's commitment to social justice includes all staff, all students and external stakeholder groups. “We must make sure that we are accessible to all, that we can offer financial support to students, that we can support students academically so that they may succeed in their studies and that each and every student from whatever race, language, religion or sexual orientation can feel welcome and safe on our campuses.
“One of the biggest challenges currently facing our sector is curriculum transformation. We have no choice but to revisit our curricula from time to time to accommodate the diversity of students.

He concluded by saying that we have to embrace the future and create opportunities from challenges and make the NWU's diversity its strength. 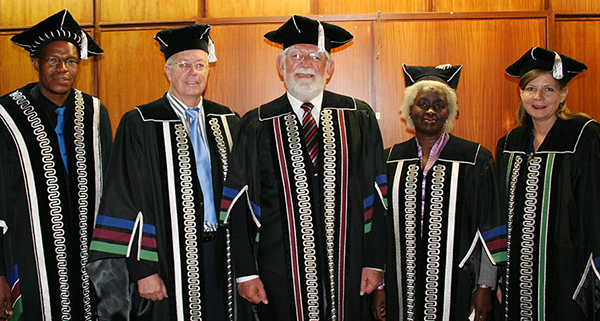